In Series One of the revamped Doctor Who, the Doctor’s companion Rose explained that the Doctor had showed her a better way of living. “You don’t just give up. You don’t just let things happen. You make a stand. You say ‘no.’ You have the guts to do what’s right, when everyone else just runs away.” A fan appears to have taken that message to heart and applied it to take a stand against U.S. President Donald Trump during his visit to London.

Someone created a Dalek—the Doctor’s arch-rival whose only mission is to exterminate all lesser life in the universe—and transformed it into political protest that is roaming the streets of London. Spotted by The Independent political reporter Ben Kentish, who posted it to Twitter, the Dalek is outfitted in a red tie and a wig reminiscent of Trump’s hair. The Dalek is surrounded by “secret service” agents clad in sunglasses and earpieces as it wanders down a city sidewalk and across Westminster Bridge.

This isn’t the only protest that London residents planned for the president’s visit. In addition to mass demonstrations in the capital and dozens of similar events planned around the country, a giant “Trump baby” balloon of a very orange Trump wearing a diaper flew over the city. Trump told The Sun the blimp makes him feel “unwelcome.” 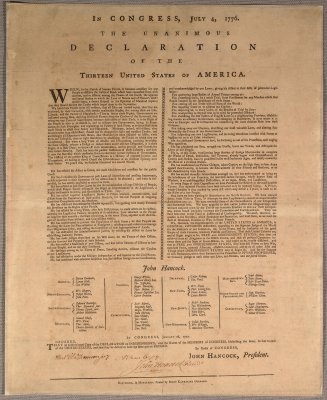 Remembering the Woman Who 'Signed' the Declaration of Independence
Next Up: Editor's Pick