A Virginia teen suffered third degree burns and was treated at a hospital after he encountered an invasive, dangerous plant while on a landscaping job.

17-year-old Alex Childress encountered a giant hogweed — an invasive, toxic weed that can can cause blindness and skin irritation, according to the U.S. Department of Agriculture. The plant touched him as he was snipping a bush, he told WWBT, an NBC affiliate, on Thursday, and originally thought the irritation on his face was a bad sunburn. When Childress came home from his landscaping job, he thought he must’ve had a severe sunburn, and when he started to take a shower, “the skin on his face was basically peeling away and peeling off,” his father told WTVR, a local CBS affiliate.

With third degree burns on his face and arms, Childress became the first patient to be treated at the Virginia Commonwealth University medical center for an injury caused by the toxic giant hogweed plant, the hospital told WWBT.

The Virginia Department of Agriculture and Consumer Services said last month the dangerous hogweed plant was spotted at a private home, and researchers have said the plant is not spreading across the commonwealth widely, according to WWBT. The invasive plant, which was first spotted in the U.S. in 1917, produces toxic sap that can cause severe irritation when skin is exposed to sunlight. It sits on the Department of Agriculture’s noxious weeds list.

With the presence of the giant hogweed plant in Virginia, officials asked anyone who spotted one of these plants to file an invasive species report. 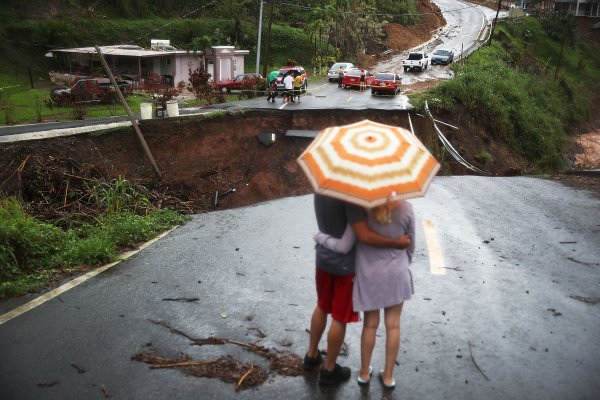 FEMA Says It Was Unprepared for Puerto Rico Hurricane
Next Up: Editor's Pick