A presidential visit that already looked like a liability to British Prime Minister Theresa May has become a diplomatic nightmare, as President Donald Trump used an interview with a British tabloid to rubbish her approach to Brexit.

In an interview with The Sun published just as May and Trump finished dining on Thursday, Trump said May’s blueprint for withdrawing the U.K. from the European Union would kill off any chances of a bilateral trade deal with the U.S.

The so-called Chequers plan, which would keep the U.K. aligned with the E.U. on many trade regulations, “will definitely affect trade with the United States, unfortunately in a negative way,” Trump told the newspaper owned by Rupert Murdoch.

“I would have done it much differently,” he said of negotiations with the political and economic bloc. “I actually told Theresa May how to do it but she didn’t agree, she didn’t listen to me. She wanted to go a different route.”

He continued: “The deal she is striking is a much different deal than the one the people voted on.”

Here, the three biggest takeaways from the interview.

Trump has long associated his own rise to power with Britain’s unexpected vote to leave the European Union in June 2016, a result that was in some ways fueled by the same populist energy and anti-establishment anger that drove Trump to power. In August of that year, he told his Twitter followers he would soon be known as “MR BREXIT,” and his team invited former UKIP leader Nigel Farage — a key figure in the Brexit campaign — to join him on the campaign trail that summer.

Trump’s remarks to The Sun suggest he is clearly still invested in the success of Brexit, as a disruptive enterprise along the lines of his renegotiation of NAFTA and the shaking of the G-7 alliance. He reportedly suggested to French President Emmanuel Macron that a Frexit might be beneficial to relations between the U.S. and France.

But his comments also suggest he doesn’t understand the full complexity of reaching a deal that withdraws the U.K. from the E.U. — undoing decades of legal, financial and social ties in a way that will meet the approval of May’s cabinet, her government, the British parliament and all 27 other EU nations. According to The Huffington Post, Trump regularly hails May on telephone calls with the greeting, “Ya Brexited yet?” as if it is a decision that can be made unilaterally.

In fact, Brexit is a hugely delicate diplomatic process. That became clear this week with the resignation of two British cabinet members, underscoring that no conceivable plan would satisfy all parties. May made a decision to forge a compromise deal that she understood would rankle hardline Euroskeptics, but might make Brexit possible ahead of a looming March 2019 deadline to leave. But to Trump, compromise is a sign of weakness.

The Donald endorses The Boris

While May will be stung by Trump’s criticism of her Brexit plan, she is likely to be outraged at his virtual endorsement of Boris Johnson — the Brexit cheerleader who resigned as Foreign Secretary earlier this week in protest at her approach.

“I have a lot of respect for Boris,” Trump said. “He obviously likes me and says very good things about me.” Asked if Johnson could be Prime Minister one day, he said “well I am not pitting one against the other. I am just saying I think he would be a great Prime Minister. I think he’s got what it takes.”

On paper, the two have certain things in common — both found fame as television stars before becoming successful in politics, both are known for their unconventional hairstyles, and both have been accused of lax preparation that lead to diplomatic blunders.

But Johnson, an Oxford graduate who prides himself on his ability to quote Ancient Greek poetry, is in fact a different kind of politician to the ostensibly self-made real estate magnate who is not known for his love of books.

Where Trump bases his judgments and opinions on instinct, Johnson is a notorious strategist who has long plotted how to inveigle his way into the United Kingdom’s top job.

The endorsement, however, will be a mixed blessing for Boris. Trump is a widely disliked figure in the U.K., as today’s protests make clear. An ITV poll suggests he is viewed negatively by 77% of the British public. Having Trump in his corner is unlikely to benefit Johnson in his attempts to become Prime Minister.

In The Sun interview, Trump blasted London Mayor Sadiq Khan for being weak on terrorism and crime — the latest in a long-running back and forth between the pair.

The mayor done a “terrible job” so far, Trump said. “Take a look at the terrorism which is taking place … I think he has done a bad job on crime, if you look, all the horrible things going on there.”

The feud began before Trump was even president. In an interview with TIME days after becoming Mayor in May 2016, Khan rued that he might be barred from entering the U.S. as a practicing Muslim of Pakistani heritage, and said he was “confident” the then-candidate wouldn’t win the presidency.

Last summer, Trump launched a tirade at Khan in the immediate aftermath of a terrorist attack in central London.

This latest salvo comes after Khan allowed an unflattering balloon showing Trump in a diaper to be raised over central London. The President is largely avoiding the British capital during his visit, as tens of thousands prepare to take the streets in protest at his policies.

However, the feud is unlikely to damage Khan’s standing in the U.K. In fact, as a member of the opposition Labour Party, he stands to benefit personally from being singled out by the much-disliked President. And he’s likely to be able to brush off Trump’s criticism; the U.S. President charged Khan with being too soft on migration and counter-terrorism — both policies set by the U.K. government, and not the Mayor’s office. 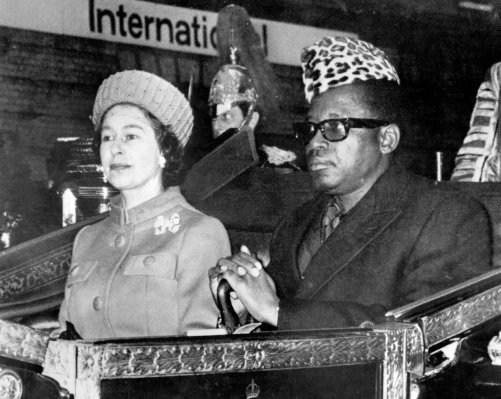 5 World Leaders Whose Visits to the U.K. Sparked Controversy
Next Up: Editor's Pick