A Salmon Has a Better GPS Than You Do

A Chinook Salmon in the Rapid River in Idaho, on May 17, 2001.
Bill Schaefer—Getty Images
By Veronique Greenwood

Young animals are capable of some pretty astounding feats of navigation. To a species like ours, whose native sense of direction isn’t much to speak of—have you ever seen a human baby crawl five thousand miles home?—the intercontinental odysseys some critters make seem incomprehensible. Arctic tern chicks take part in the longest migration on Earth—more than ten thousand miles (16,000 km)—almost as soon as they fledge. Soon after hatching, young sea turtles take to the waves and confidently paddle many thousands of miles to feeding grounds. Young Chinook salmon likewise make their way from freshwater hatching grounds to specific feeding areas in the open ocean.

Biologists know that these species are able to sense things that humans can’t, from the Earth’s magnetic field to extremely faint scents, that could help with navigation. But they may also be inheriting some specific knowledge of the paths they have to follow. A paper in this week’s Current Biology reports that young salmon appear to possess an inborn map of the geomagnetic field that can help them get where they need to go.

(MORE: The Mystery of Sloth Poop: One More Reason to Love Science)

The researchers, who are primarily based at Oregon State University, performed a series of experiments with Chinook salmon less than a year old that were born and raised in a hatchery and had not yet taken part in a migration. They placed the salmon in pools surrounded by magnetic coils that they could tune to mimic the Earth’s magnetic field at various points in and around the salmons’ feeding grounds. (Kenneth Lohmann at University of North Carolina, Chapel Hill, who has done similar studies that established that baby sea turtles have inborn maps, is also an author of the paper.)

It’s unlikely the salmon see themselves as located at a certain point on a map in the way we would. Instead, like other animals with extraordinary navigational skills, they’ve probably evolved to respond with a certain behavior when certain environmental conditions, in this case changes in the magnetic field, occur. Such instinctual U-turns would keep the fish from overshooting the safe range of their feeding area, the researchers say. And once that behavior gets established, it would become evolutionarily fixed: anything that helps keep animals alive long enough to reproduce is not going away. If a similar talent were required of humans, evolution would no doubt find a way to provide it to us too. As it stands, Google Maps and GPS will remain the best we can do to rival the salmon. 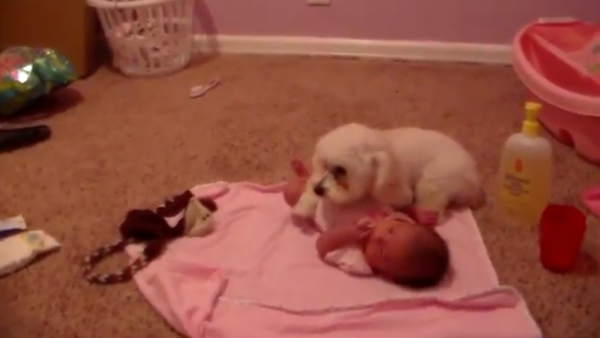 This Poodle Will Stop At Nothing to Protect His Baby Sister From an Evil Blow Dryer
Next Up: Editor's Pick