After a Successful Cave Rescue, Thailand's Navy SEALs Will Add Cave-Diving to Their Training

Following the successful rescue of 12 young soccer players and their coach trapped in a flooded cave in northern Thailand, the country’s Navy SEALs will now implement cave-diving into its training regimen to be better prepared for unforeseen emergencies.

When the mission to extract 13 members of the Wild Boars soccer team from Tham Luang cave began, “many simply did not know what to do,” said Lt Cdr Khai Tochaiphum, a former SEAL instructor, adding that none had cave-diving experience. They were helped by expert cave divers from all over the world.

Nicknamed the SEALs, 127 present and former members of Thailand’s Underwater Demolition Assault Unit took part in a colossal international effort to rescue the team members who were trapped in the cave for over 17 days. Rescuers faced daunting challenges, from decreasing oxygen levels and fears of further flooding. The SEALs also dealt with tragedy when former Navy SEAL Samarn Kunan died while distributing oxygen tanks throughout the flooded tunnels. His death underscored the dangers of the mission.

On Wednesday, Apakorn met with experts from Elon Musk’s SpaceX team who had donated a mini-submarine for the rescue effort. The equipment was rejected for the mission but the Navy believes it could be useful for future efforts, according to the Post.

The young boys of the Wild Boars soccer team, all between the ages of 11 and 16, and their 25-year-old coach Ekkapol Chantawong became trapped inside the Tham Luang cave on June 23, when sudden rains flooded their exit. Aided by at least seven foreign governments, over 1,000 people undertook a monumental search effort that ended in elation late Monday when a pair of British divers found all 13 alive and in stable health. The boys are currently recuperating in a hospital in Chiang Rai province. 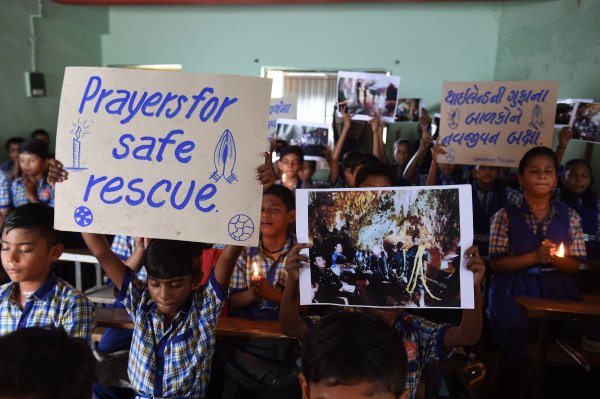 Meet the Heroes Who Kept Trapped Boys Alive
Next Up: Editor's Pick