The Federal Emergency Management Agency has said it did not have a “phasing” plan in place for getting resources to Puerto Rico when Hurricane Maria devastated the island last September.

Meanwhile the agency’s supply warehouse on Puerto Rico had zero cots, zero tarps and an almost negligible stockpile of food and water, its limited contents depleted during another storm two weeks earlier. In short, FEMA was badly underprepared for one of the worst disasters to strike Puerto Rico, the agency acknowledges in a new report assessing its response to the 2017 hurricane season.

In quick succession, three major storms slammed into the United States in 2017, leading to “unprecedented” demands on the agency’s staffing, resources and budget.

Nearly 4.8 million households impacted by the 2017 storm season and the California wildfires requested assistance from FEMA, more than the previous 10 years combined. Harvey, Irma and Maria were each among the five costliest hurricanes on record and collectively inflicted $265 billion in damages.

Amid competing major disasters, the overstretched agency struggled to provide relief to storm victims, but drew particular criticism for its response in Puerto Rico. The agency’s report depicts a chaotic situation where incomplete planning “under-estimated the actual requirements” and led to “differences between the expected and actual impacts” on the ground.

The agency said it was not prepared for Puerto Rico’s “insufficiently maintained infrastructure (e.g., the electrical grid),” and had not bargained on the local government’s cashflow problems.

The report states that while the agency had committed to updating its Caribbean Response Plan before the 2017 season, the plan was incomplete by the time the hurricane hit, forcing the response operation to devise portions of the agenda on the fly. Plans also relied on a five-year-old earthquake and tsunami manual that had not anticipated a hurricane would affect the U.S. territory’s entire population of over 3 million.

When Maria landed in Puerto Rico on Sept. 20, it knocked out electricity as well as most of the cellphone towers, rendering communication about who needed what, and where, almost impossible. Most of the agency’s logistical staff were already deployed to Florida and Texas, in response to hurricanes Irma and Harvey. To cope with shortages, FEMA said it promoting staffers into leadership positions that in some cases exceeded their abilities.

Critics of FEMA’s response in Puerto Rico have alleged discrepancies between recovery efforts on the mainland versus the island territory. A Harvard study estimates there were as many as 4,600 deaths associated with Maria. FEMA’s report said the fatalities were being reviewed by Puerto Rico’s government.

The White House has defended the federal response to Maria. President Donald Trump went so far as to say, “I’d say it was a 10” on a scale of 10.

Ten months later, nearly 1,000 households in Puerto Rico still lack power, according to the New York Times, while thousands of islanders who took shelter on the mainland have been unable to return. FEMA’s report notes that a full recovery from 2017’s storms will take years. 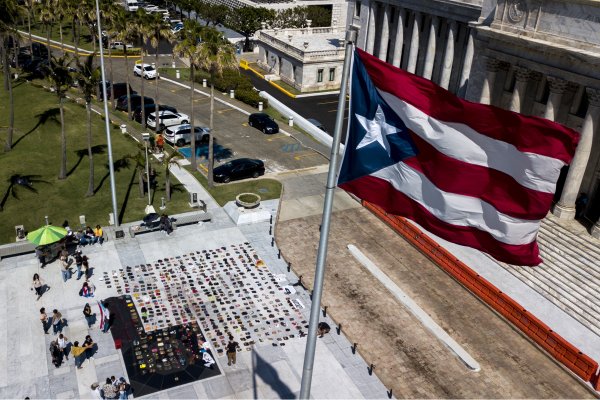 Puerto Rico Governor Says Cop Should Be Fired After Woman Harassed in Viral Video
Next Up: Editor's Pick