If you’ve followed the trail of angry tweets that President Donald Trump scattered this week over Europe, or the resulting headlines about the demise of NATO and the European Union, this may come as a surprise: All is quiet on the eastern front.

Among the nations that sit on the edge of these blocs, squeezed between the West and Russia, the tensions within NATO have not prompted people to start digging trenches or calling up reserves. Nor have Trump’s broadsides this week against the leaders of the U.K. and Germany made Eastern Europe fall into despair.

“Everywhere you look there are these dire predictions: ‘It’s the end of the Western world,’ and all that,” Toomas Hendrik Ilves, who served as President of Estonia from 2006 to 2016, told me on Tuesday over dinner in Tallinn, his nation’s capital. “I’m not worried about NATO.”

It may seem like a paradox. But for the smaller nations of Eastern Europe, the relative strength of the world’s most powerful military alliance, and the relative weakness of Russia, looks pretty obvious. Estonians have been dealing with their Russian neighbor long enough to know that, under President Vladimir Putin, Russia is by no means the Goliath it was during the Cold War. And in the unlikely event of a Russian attack, the easternmost members of NATO feel pretty confident that their allies would have their backs.

Few people have given more thought to these scenarios, or have more riding on their outcome, than Major General Meelis Kiili, the commander of Estonia’s Defense League, a paramilitary organization known to the locals as the Kaitseliit. His job is to train tens of thousands of Estonian volunteers in the art of “total defense,” including the use of guerrilla warfare, in the event of another Russian occupation of Estonia. And if anyone would have good reason—both personal and professional—to hype the threat from Russia, it would likely be Commander Kiili, whose grandfather served as a so-called Forest Brother, or guerrilla fighter, after the Soviets invaded Estonia in 1940.

But when we met on Wednesday at his office in Tallinn, the general did not seem bothered by the day’s remarks from President Trump, who had reportedly told his allies that unless they start spending much more on defense, they may end up fending for themselves.

“Will NATO come to help Estonia? That’s the wrong question,” Kiili told me. “The question is whether NATO will defend itself. And the answer is, absolutely it will.” The alliance simply has no choice, he says. If it loses even an inch of its territory, “the Western world will collapse, and the only one who wants that is Putin.”

This is not the impression one gets from some of the coverage of Trump’s European tour. His attacks against British Prime Minister Theresa May set off the latest round of panic on Friday over the future of transatlantic ties, and his upcoming summit with Putin on Monday has prompted some observers to suggest that Trump is not much more than a Russian sock puppet. At least one of the frightened voices has, in fairness, come from Estonia, where a senior military officer recently told Politico that he has nightmares about a Russian invasion.

But bad dreams are not a reliable sign of what’s to come. In spite of Trump’s rhetoric, the U.S. still signed the NATO summit’s 79-point declaration, which reaffirmed the American commitment to defend all its allies and condemned Russia for a long list of crimes and transgressions. At an impromptu conference, Trump said America’s commitment to the alliance “is very strong.” At no point did he or the other leaders suggest scaling back their countries’ military exercises in Eastern Europe or reducing the number of NATO troops that were stationed along Russia’s border, including in Estonia, after Putin sent troops into Ukraine in 2014. Under pressure from Trump, the allies merely repeated an earlier pledge to ramp up defense spending.

Russia is doing the opposite. As its economy continues to suffer the effects of low oil prices and Western sanctions, Russia reportedly slashed its military budget by an astounding 17% last year, and its government has announced plans to spend no more than 1.5% of its GDP on defense, far less than the 2% benchmark that all NATO allies have committed to meeting by 2024.

If that weren’t enough to put the Estonians at ease, they can also look for comfort in the basic nature of the Putin regime, Commander Kiili says. “It is an oligarchy,” he says, and its elites still like to keep their wealth stored in Western banks and their children enrolled in Western schools. They have no interest in cutting off their ties to Europe, strained as they already are.

Neither does the Russian public—particularly the middle class, which would be clear to anyone who visits some of the tourist spots in Estonia. While the NATO leaders sat down for the first day of their summit in Brussels, and the columnists across the Western world discussed whether Russia would soon be feasting on the remains of a collapsing global order, a cruise ship from St. Petersburg arrived on schedule in Tallinn, its side painted with a mermaid holding a martini glass. The faces of the Russian tourists, and their Estonian hosts, looked perfectly at ease as they greeted one another at the port and in the city—much more so than the European statesmen who were forced this week to welcome President Trump. 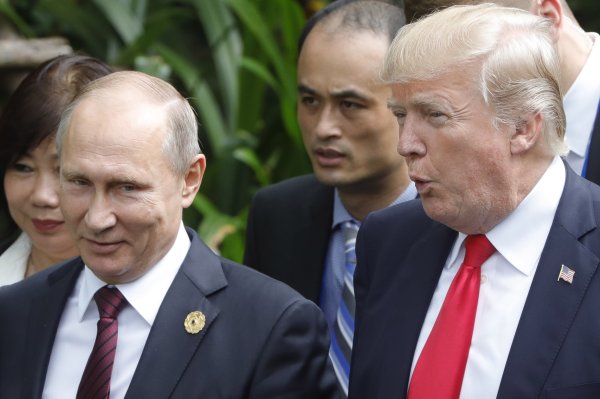 'It's Not a Question of Friend or Enemy.' Trump Calls Putin a 'Competitor' During Surprise NATO Press Conference
Next Up: Editor's Pick