Serena Williams on Heading to the Wimbledon Final: 'It's Not Inevitable For Me to Be Playing Like This'

Serena Williams is headed to her 30th Grand Slam singles final after beating Julia Goerges in the 2018 Wimbledon semi-final on Thursday. Her win sets the stage for a redux of the 2016 Wimbledon final in which she defeated Angelique Kerber, who will also be her 2018 opponent.

It was an especially sweet victory for Williams, a 23-time champion, who survived harrowing complications when she gave birth to daughter Alexis Olympia just 10 months ago. Following the baby’s delivery, Williams had a number of health issues, including a pulmonary embolism and a hematoma, which led to her having multiple surgeries.

Williams isn’t taking her time at Wimbledon for granted, noting in a post-game interview that she “didn’t expect to do this well in my fourth tournament back.”

“It’s not inevitable for me to be playing like this,” Williams said. “I had multiple surgeries and nearly didn’t make it when I gave birth. I’m enjoying every moment.”

Williams will face off with Kerber on Saturday; if she is victorious, she’ll tie Margaret Court’s all-time record for grand slam singles titles. 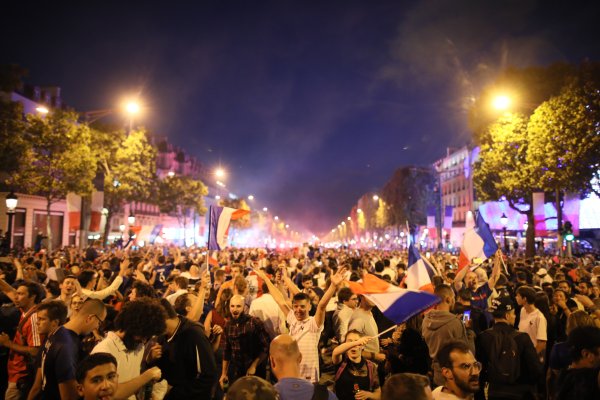 France Goes Wild In the Streets After Their World Cup Win
Next Up: Editor's Pick