As a contentious North Atlantic Treaty Organization summit in Brussels began to wind down on Thursday, President Donald Trump claimed victory over defense spending and reaffirmed U.S. commitment to the alliance.

After a week in which he had insulted allies and questioned the value of NATO, Trump—flanked by Secretary of State Mike Pompeo and National Security Adviser John Bolton—gave an impromptu news conference at NATO headquarters Thursday morning before leaving Brussels.

“The United States commitment to NATO is very strong,” he said. “I think NATO is much stronger now than it was two days ago.”

It was a surprising statement after two days during which Trump’s ‘America first’ foreign policy approach had presented a significant challenge for the organization. Though NATO allies have squabbled in the past, Trump seemed to be leaving in his wake not just bruised feelings, but deeper concerns about the future of the Western alliance that has served as a bedrock of the international order. At the press conference Thursday, just days before he plans to meet with Russian President Vladimir Putin, he said he hoped he “will be able to get along with Russia,” adding that his NATO allies told him they agree.

“The question [on] all sides is not just a tactical one, that is, how to resolve a disagreement, but a strategic one,” says Stephen Sestanovich, a senior fellow for Russian and Eurasian studies at the Council on Foreign Relations. “That is, are we really committed to the same goals and to the future of the organization?”

After a tense first day, Trump didn’t ease up on the second. Before arriving a half hour late to the final day of meetings on Thursday, Trump tweeted that “the U.S. pays tens of Billions of Dollars too much to subsidize Europe,” that Germany’s oil and gas pipeline with Russia is “not acceptable,” and that allies must not only all reach the 2 percent defense spending guideline, but double that to 4 percent.

Trump had kicked off the NATO summit at breakfast with the organization’s leader on Wednesday by accusing Germany of being “totally controlled” and “captive to Russia” because of a pipeline deal that would bring gas directly between the two nations.

Hours later, he and German Chancellor Angela Merkel met privately and discussed the pipeline, each reaffirming the partnership between the U.S. and Germany. But not before Merkel and other top officials in the German government had publicly fired back at Trump’s breakfast diatribe.

At the end of the first day, Trump unsettled allies even more by questioning the value of the military alliance, which was formed to counter Soviet aggression during the Cold War.

“The problem is Trump seems to really see no benefit that allies provide the United States,” says James Goldgeier, visiting senior fellow at the Council on Foreign Relations. “He seems to look at this as we do everything for them, and we provide them with benefits, and they just take advantage of us.”

Throughout the summit, Trump berated the other members of NATO for not spending enough on defense. Going into the week he was pressuring them to spend 2 percent of their gross domestic product (GDP) on defense, a figure that was established in 2002 and reaffirmed in 2014 when the allies not meeting the target pledged to reach it within a decade. The figure is non-binding, and the goal was to reach it by 2024, not immediately. But as experts, including TIME contributor James Stavridis, a retired U.S. Navy admiral who commanded all NATO forces, note, Trump “tends to liken the situation to a need to hound golfers for not paying their dues at the local country club.”

Over the course of the summit, Trump upped his demand to 4 percent, a target that is above the United States’ own spending on defense, according to NATO calculations. White House spokeswoman Sarah Sanders said this is not a formal proposal and that Trump had merely “suggested” this increase. But Trump’s Thursday morning tweet, before meetings on Russian aggression and the war in Afghanistan, said allies “must” get to 4 percent.

Following Trump’s press conference, French President Emmanuel Macron denied that NATO members had agreed to increase their defense spending past 2 percent. “There is a communique that was published yesterday. It’s very detailed,” Macron said, according to the Associated Press. “It confirms the goal of 2 percent by 2024. That’s all.”

At the Thursday press conference, Trump claimed that his push for a focus on defense spending had helped make NATO a stronger alliance. “We made a tremendous amount of progress today,” he told reporters. “The additional money they will be putting up has been really amazing.” He said an extra $33 billion has been committed by NATO countries other than the U.S.

Asked whether he had threatened to pull out of NATO, per reports, Trump said that he had “told people that I would be very unhappy if they didn’t up their commitments very substantially.” After those threats, he said: “Now we’re very happy and have a very, very powerful, very strong NATO.” As to whether he could unilaterally pull the U.S. out of the alliance without congressional approval, Trump said, “I think I probably can, but that’s not necessary.”

It was only last month that after a disastrous G-7 summit, Trump signed a joint communiqué with other allies and then changed his mind while flying home. On Thursday, he was asked at NATO whether his tweets aboard Air Force One later in the day might sound a different tone than his show of unity at the press conference. “I’m very consistent,” he replied. “I’m a very stable genius.”

Trump leaves Brussels on Thursday for some extra time with one key member of the alliance: British Prime Minister Theresa May. It will be Trump’s first working visit to the United Kingdom since he became President, and massive protests in London are expected. Tens of thousands of people are likely to protest in the British capital on Friday, while Trump is outside the city at May’s country residence Chequers, before visiting Windsor to meet the Queen.

The U.S. Embassy has warned Americans to be careful in London during Trump’s visit, recommending that they “exercise caution if unexpectedly in the vicinity of large gatherings that may become violent,” “keep a low profile” and “be aware of your surroundings.”

It’s an uncomfortable environment for May, who is facing her own political unrest outside of Trump’s visit. Two of her top government officials resigned earlier this week over negotiations on how to manage Brexit, including foreign secretary Boris Johnson, whom Trump has called a “friend.” He described the U.K. as a “hot-spot with lots of resignations.”

Trump’s trip to Britain will test the bonds of the U.S. and U.K.’s special relationship. On Thursday, Trump said he wasn’t troubled by the planned protests. “I think it’s fine,” he said. “They like me a lot in the U.K.” 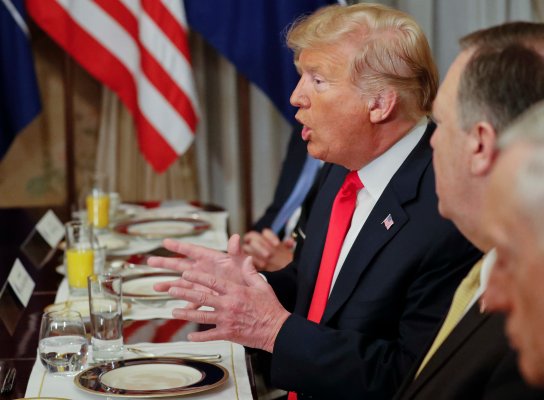