Why Do Americans Call It Soccer Instead of Football? Blame England

England's defender Harry Maguire drives the ball during the Russia 2018 World Cup quarter-final football match between Sweden and England at the Samara Arena in Samara on July 7, 2018.
FABRICE COFFRINI—AFP/Getty Images
By Billy Perrigo

In the World Cup, the U.S. and England aren’t traditionally rivals. But, off the field, a different type of rivalry has reigned for more than a century: what to call the world’s most popular sport.

To Americans, it’s soccer. To most of the rest of the world, (including England, the birthplace of the modern sport,) it’s football. But what most people don’t know is that the word “soccer” is not in fact an American invention. On the contrary, it was an import from England, and one that was commonly used there until relatively recently.

At least, that’s the argument made by Stefan Szymanski, a professor of sports economics at the University of Michigan. In a paper from 2014, Szymanski writes that “soccer” originated in late 19th century England, as a way of differentiating between variants of the game which at that time did not have a commonly agreed-upon set of rules.

In the early 1800s in England, football and rugby existed as different variations of the same game. But in 1863, the Football Association was formed to codify the rules of football so that aristocratic boys from different schools could play against one another. In 1871, the Rugby Football Union followed suit. The two sports officially became known as Rugby Football and Association Football. (Those new rules were slow to spread to America, where another version of the game was evolving — one that the rest of the world now knows as “American football,” and is played in the NFL.)

In England, Szymanski writes, aristocratic boys came up with the shortened terms “rugger” and “soccer” to differentiate between Rugby Football and Association Football. To support this argument, he cites a letter to The New York Times, published in 1905: “It was a fad at Oxford and Cambridge to use “er” at the end of many words, such as foot-er, sport-er, and as Association did not take an “er” easily, it was, and is, sometimes spoken of as Soccer.”

And the term, Szymanski says, was widely recognized in England through the first half of the twentieth century, according to data he crunched from books and newspapers. It became even more prevalent after the World War II — driven, he suggests, by the number of American soldiers in the country and the infatuation with American culture that came after the war.

But by the 1980s, Brits started to turn against the word. “The penetration of the game into American culture,” Szymanski writes, “has led to backlash against the use of the word in Britain, where it was once considered an innocuous alternative to the word ‘football.'”

In March, Szymanski co-authored a book alongside Silke Weineck, a literature professor and linguist at the University of Michigan. In Weineck’s words, the book – titled It’s Football, not Soccer (and Vice Versa) – “delves into internet culture, the history of sports and the history of words, the oddity of linguistic ostracism, the relationship between sports and nationalism, and so on.”

With England now into the semi-finals of the World Cup for the first time since 1990, fans are celebrating their nation’s success in the sport born in their country but long mastered by foreigners. On Twitter, that pride is manifesting itself, partially, in the age-old (since the 1980s at least) tradition of bashing the word soccer.

“It’s football not soccer,” one person tweeted, on the night of England’s successful victory over Sweden which propelled the team to the semi-finals. “The English created the game = football.”

The World Cup draws to a close this weekend, but the argument over the name of the sport it celebrates certainly won’t. 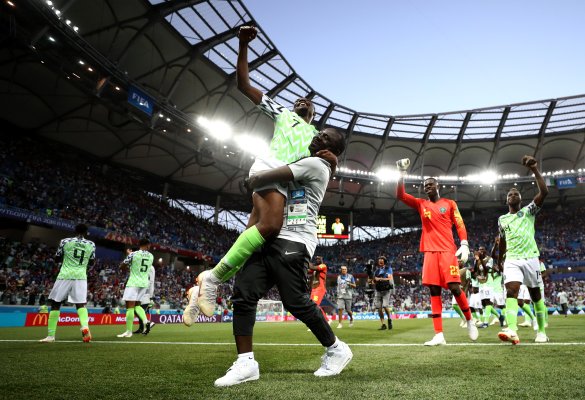 Iceland's Big Loss to Nigeria Just Pushed the World Cup Drama to 11
Next Up: Editor's Pick