There are 29 members of the North Atlantic Treaty Organization, but a 30th country has loomed large over the first day of the alliance’s summit: Russia.

President Donald Trump is due to meet with Russian President Vladimir Putin in Helsinki early next week, and some allies are concerned he might accept the country’s annexation of Crimea or vow to halt U.S. military exercises in Europe. Trump exacerbated those fears ahead of the summit when he said he couldn’t say whether Putin is a friend or foe and that their meeting “may be the easiest of them all.”

“People are understandably perplexed and concerned by the fact that President Trump likes to make goo-goo eyes at Mr. Putin” despite his tough policies towards the Kremlin, says John Herbst, former U.S. ambassador to Ukraine who is now at the Atlantic Council.

But Trump flipped the script during his first event in Brussels, instead accusing Germany of being “totally controlled” and “captive to Russia” at a contentious breakfast with National Secretary General Jens Stoltenberg.

In a message to Germany, Trump asked why the U.S. should “protect you against Russia” given that the two countries make deals, apparently referencing the Nord Stream 2 pipeline that would bring gas from Russia directly to Germany. Trump’s relationship with German Chancellor Angela Merkel is fraught and has become a significant conflict within the alliance, especially as he hammers allies for failing to meet a 2% defense spending guideline. “Germany, as far as I’m concerned, is captive to Russia, because it’s getting so much of its energy from Russia,” Trump said. “So we’re supposed to protect Germany, but they’re getting their energy from Russia. Explain that.”

Stoltenberg pushed back in the moment, but struck a more conciliatory tone in remarks after his breakfast with Trump (which, he joked, was “paid for by the United States”). Less than a week before Trump’s sit down with Putin, Stoltenberg advocated communicating with Russia. “We have to talk to Russia to manage a difficult relationship,” he said.

There was no outward hint of tension during the NATO leaders’ “family photo” as Trump smiled in his red tie, standing between Stoltenberg and British Prime Minister Theresa May, with whom he has a scheduled meeting in England later this week. But Trump’s opening salvo against NATO and Germany had already forced Merkel to respond publicly even before her scheduled pull-aside meeting with Trump later in the afternoon. “I experienced firsthand that a part of Germany was occupied by the Soviet Union,” she told reporters as she arrived at NATO headquarters. “It is good that we can now make our own decisions.”

Other members of the German government also fired back: “We are not prisoners, neither of Russia nor of the United States,” said German foreign minister Heiko Maas. “There is no substance to that sentence,” German Defense Minister Ursula von der Leyen told NPR.

When Trump and Merkel spoke later Wednesday afternoon, Trump told reporters that they had a “great meeting” where they discussed military spending and trade. “We have a very, very good relationship with the chancellor,” he said as he and Merkel perched on white chairs separated by a side table and flanked by aides. Merkel added, “We are good partners and wish to continue to cooperate in the future.” Responding to a question from the press, Trump acknowledged that the pipeline did come up in the meeting, but would not elaborate further. (It also came up in his subsequent pull-aside with French President Emmanuel Macron, who said he did not agree with Trump that Germany is captive to Russia.)

Trump isn’t the only world leader to oppose the Nord Stream 2 pipeline. President Barack Obama was against it during his tenure, and other NATO allies including Poland and the Baltic States vehemently oppose the deal. By linking his opposition to the pipeline to the fact that the U.S. and NATO have to “protect” Germany, Trump added another data point to support his claim that the United States is overburdened on defense spending and taken advantage of by allies.

This isn’t the first time Trump has mentioned the pipeline. But some experts question Trump’s strategy in raising the issue on Wednesday, days before he’s due to meet with Russia’s leader. “Weakening Germany — and more specifically Chancellor Merkel — weakens Europe and could weaken the EU’s ability to maintain sanctions against Russia,” says Heather Conley, director of the Europe Program at the Center for Strategic and International Studies. “Opposing another Russian pipeline to Europe is appropriate U.S. policy, but the constant presidential attacks against Germany [are] likely part of a larger effort to pave the way for an American accommodation to President Putin at the upcoming Helsinki summit.”

Others think Trump’s comments Wednesday will have the opposite effect and anger Putin: “By suggesting that Putin ‘controls’ Germany, Trump is impugning Russia’s motives in a way that undercuts his upcoming effort to forge a cooperative relationship with Putin in Helsinki,” says Charles Kupchan, senior fellow at the Council on Foreign Relations.

Back in Washington, the first reactions by members of Congress did not fall neatly along party lines. Republican Sen. Tom Cotton from Arkansas tweeted support for Trump’s position, arguing that the pipeline “strikes at heart of NATO unity” and is a “nakedly selfish policy” for Germany.

But Republican Sen. Orrin Hatch said he doesn’t agree with Trump that Germany is “controlled” by Russia. “I think sometimes he can be a little too critical of the other counterparts, and I don’t think he should be critical,” the Utah senator said.

In a joint statement, House and Senate Democratic leaders Nancy Pelosi and Chuck Schumer denounced Trump’s “brazen insults and denigration” of Germany and said, “His behavior this morning is another profoundly disturbing signal that the President is more loyal to President Putin than to our NATO allies.”

Regardless of how Trump’s specific criticism of the pipeline will be received by Moscow, the broader conflict fermenting within NATO this week and the deepening rifts between Trump and other leaders may still align with Russia’s interests.

“Putin has for so long wanted to find ways to undermine the West and to create divides between the United States and Europe,” says James Goldgeier, visiting senior fellow at the Council on Foreign Relations. “I don’t think he ever thought he would have an American president who would share his outlook on undermining NATO.” 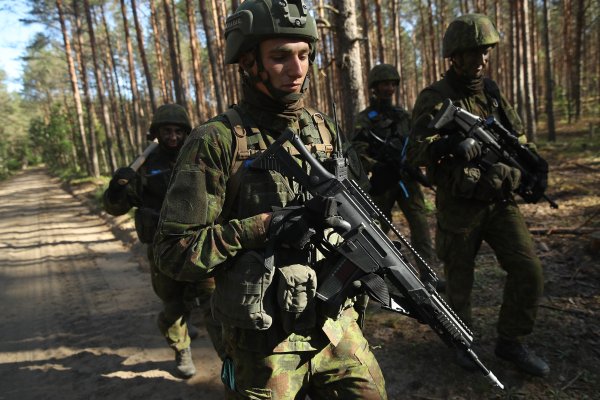 Trump Is Trying to Dismantle the World Order. Is NATO Next on His List?
Next Up: Editor's Pick