The mission to rescue 12 young soccer players and their coach trapped in a cave in northern Thailand for more than two weeks involved more than 1,000 people—including a team of international divers. Here, we look at four people, and one group, hailed as heroes for their tireless work.

The 25-year-old assistant coach of the Wild Boars soccer team was initially criticized in Thailand for letting the boys enter the cave but has since been credited with keeping the boys alive. Coach “Ek,” as he is known, is a member of the stateless ethnic Shan minority and joined the Buddhist clergy after his parents died. His meditation skills, athleticism and love for the boys likely powered their survival, according to Phrakhu Preyutchetiyanukarn, the abbot of the monastery where he lives and works.

At the time the team was trapped, Narongsak Osottanakorn was nearing the end of his term as governor of Chiang Rai province. Upon the date of his transfer, he was kept on as chief of the rescue mission due to his unwavering leadership throughout the crisis. Throughout the 18-day ordeal, Narongsak was on the ground every day to oversee the effort and brief journalists twice daily. Some Thais have called for him to serve as governor of Bangkok, but in the near future he will assume his new post in the nearby province of Phayao.

This retired Thai Navy SEAL sacrificed his life to help save the Wild Boars, becoming the dangerous mission’s only fatality. Samarn, who last worked as a security officer for the Airports Authority of Thailand in Bangkok, volunteered to help deposit oxygen tanks for divers along the rescue route. He was found unconscious by another diver after completing his last mission in the early hours of July 6, but multiple attempts to resuscitate him failed. Samarn is reportedly survived by his wife and father. “You are the hero in my heart,” his widow said.

Multitalented Dr. Pak earned instant fame in Thailand after a video shared by the Thai Navy showed him inside the cave treating the trapped boys’ wounds. An Army doctor, he also completed SEAL training, making him unusually qualified for the task at hand. Staying inside the cave for several nights, Dr. Pak nursed the team back to health in preparation for their escape. The “Doctor-Diver,” as he has come to be known, was crucial to the success of the rescue.

Thailand’s Navy SEALs were among the first responders, and remained at the forefront of search and rescue from start to finish. Arriving late at night on June 24, SEALs wasted no time wading into the dark, uncharted waters; the first team of six dove in at 2 a.m., just hours after their arrival. Eighteen SEALs were initially assigned to the rescue, but more joined as the situation worsened. At one point a government official said more than 60 Thai SEALs were on the scene. Tragically, a fatal boat accident off the coast of the southern city of Phuket took place while many of the country’s rescue divers were stationed in Mae Sai. But when it comes to the Wild Boar saga, Thai Navy SEALs are true saviors. 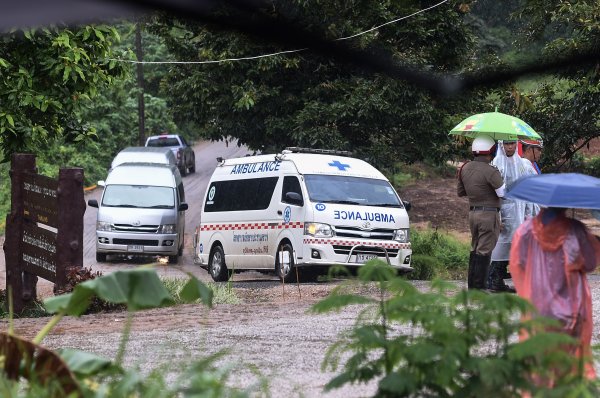