Palin, who sat down with her daughter for an interview with Cohen, is outraged that the comedian, along with Showtime and CBS Corp., pretended to tap her for a “legit Showtime historical documentary.”

“Yup – we were duped. Ya got me, Sacha. Feel better now?” Palin posted. “I join a long list of American public personalities who have fallen victim to the evil, exploitive, sick ‘humor’ of the British ‘comedian’ Sacha Baron Cohen, enabled and sponsored by CBS/Showtime.”

Cohen, of Borat and Ali G fame, prank interviewed Palin for his upcoming show Who Is America?, which premieres on Showtime Sunday, July 15 at midnight, but will regularly air at 10 p.m ET. He reportedly filmed numerous interviews with well-known politicians and public figures for the prank series, including former Vice President Dick Cheney, who was convinced to sign a “waterboard kit” on camera.

“[M]y daughter and I were asked to travel across the country where Cohen (I presume) had heavily disguised himself as a disabled US Veteran, fake wheelchair and all,” Palin wrote on her Facebook post. “Out of respect for what I was led to believe would be a thoughtful discussion with someone who had served in uniform, I sat through a long ‘interview’ full of Hollywoodism’s disrespect and sarcasm – but finally had enough and literally, physically removed my mic and walked out, much to Cohen’s chagrin.”

Matt Drudge, editor of the Drudge Report, tweeted out a list of names of the other public figures Cohen has supposedly pranked for the show, including Sen. Bernie Sanders and Ted Koppel.

Cohen himself recently tweeted out two teaser videos for the new series. One begins, “Imagine if Sacha Baron Cohen had been undercover secretly filming a new show for a year…” followed by a montage of various images. Cohen’s voice off camera then asks Cheney, who is on camera, “Dick Cheney is it possible to sign my waterboard kit?”

Cohen’s other teaser video on Twitter is titled “A Message From Donald J. Trump.” It starts off with footage of President Donald Trump insulting Cohen. “This 3rd rate character named Sacha Baron Cohen, I only wish that he would have been punched in the face so many times right now, he’d be in a hospital,” Trump says in the video. “It was disgraceful he oughta be fired immediately. Sacha Baron Cohen go to school, learn about being funny. You don’t’ know sh*t.”

The video ends with a Trump University logo.

Both videos have been viewed more than 1 million times.

Palin challenged Cohen in her Facebook post to donate the money he’s made from the new show to veterans, after she said he disguised himself as one.

“The challenge is to Cohen, CBS and Showtime: donate all proceeds to a charitable group that actually respects and supports American Vets,” she wrote. “Mock politicians and innocent public personalities all you want, if that lets you sleep at night, but HOW DARE YOU mock those who have fought and served our country. Truly sick.”

Showtime CEO David Nevins praised Cohen for his work on the series.

“He is the premier provocateur of our time, but not for the sake of ‘gotcha’ moments,” according to CBS News. “Behind the elaborate setup is a genuine quest for the truth about people, places and politics.” 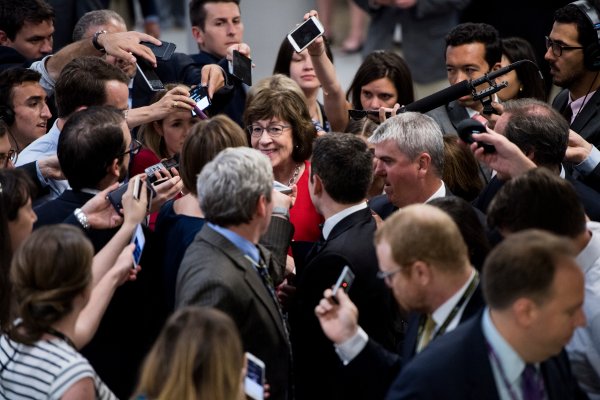 Here's What the Key Senators Think About Brett Kavanaugh Right Now
Next Up: Editor's Pick