Elon Musk’s “kid-sized submarine” was ultimately “not practical” for helping rescuers save a group of boys and their soccer coach stuck in a Thailand cave, the head of the rescue operation said.

“The equipment they brought to help us is not practical with our mission,” Chiang Rai Gov. Narongsak Osotthanakorn, the head of the rescue efforts, said of the billionaire’s technology, according to BBC. “Even though their equipment is technologically sophisticated, it doesn’t fit with our mission to go in the cave.”

Rescuers said Tuesday they have saved all 12 boys and their soccer coach who were trapped in the Tham Luan Nang Non cave last month after monsoon rains flooded their escape routes. The first boys rescued in what’s been a days-long process were in “high spirits” and generally appeared “healthy,” according to the Associated Press. One diver, a retired Thai Navy SEAL named Saman Kunan, died in the rescue effort last week.

Musk, the billionaire CEO of SpaceX and Tesla, Inc., vowed to help rescue efforts by designing a mini-submarine that could navigate through the cave’s tight canals. Musk appeared to deliver the submarine to the rescuers in Thailand, tweeting that he would leave it “here in case it may be useful in the future,” adding, “Thailand is so beautiful.”

Over the weekend, Musk tweeted footage of his team testing the mini-submarine in a pool at a Los Angeles high school. Last week, Musk tweeted that a set of engineers from SpaceX and The Boring Company, his tunneling company, traveled to Thailand “to see if we can be helpful.”

“There are probably many complexities that are hard to appreciate without being there in person,” Musk tweeted.

Musk celebrated the news of the youths’ rescue early Tuesday: 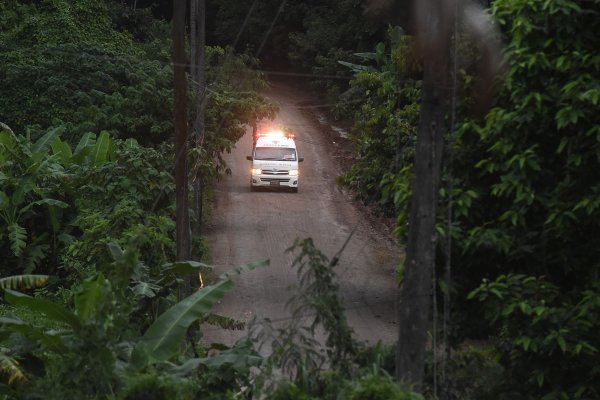 First Boys Free From Thai Cave at Last
Next Up: Editor's Pick