By Abby Vesoulis and Abigail Simon

President Donald Trump’s second nominee for the Supreme Court is in harmony with the current Republican Party’s mainstream — a sign of just how much he has relied on the GOP Establishment in his judiciary decisions, court experts say.

In his selection of federal appellate judge Brett Kavanaugh Monday evening, Trump again drew from a list of potential Supreme Court justices that he drafted during the 2016 election with the help of conservative legal organizations like the Federalist Society.

He was also advised by White House counsel Don McGahn, a leading force behind Trump’s list, and by outside consultant Leonard Leo, who is on leave from the Federalist Society. Kavanaugh was reportedly McGahn’s preferred choice.

For legal scholars and GOP donors alike, the pick was predictable, noticeably lacking Trump’s flair for the unconventional on issues such as trade and foreign policy.

Kavanaugh “would have been the frontrunner to be nominated if it was a President Bush or a President Rubio,” said David Fontana, a constitutional law professor at George Washington University and a former clerk on the U.S. Court of Appeals for the Ninth Circuit. “Of all the things that Trump has done, this is by far the least surprising.”

Trump’s campaign list of potential nominees was intended to assuage Republican voters who were concerned that Trump — who once mused about picking his older sister for a nomination — might not pick a conservative enough justice.

And it worked. Following the death of Antonin Scalia and the blocked nomination of Merrick Garland, the winner of 2016’s presidential election was going to have the power to shift the ideological makeup of the court — the possibility of which played a significant role in drawing people to the polls. According to data from a CNN exit poll, 70% of voters said that Supreme Court appointments were “important” to their vote. And, of those who said it was the “most important factor” in their decision, over half voted for Trump.

“The point of the list was to signal as strongly as possible to social conservatives and other members of the GOP constituency that he would pick somebody that they found reliable,” said Michael Dorf, a former Supreme Court clerk of Justice Anthony Kennedy and a current law professor at Cornell.

Notably, Kavanaugh was not on the first rendition of Trump’s list, which started at 11 people and later expanded to 25.

“When the first list came out, many people remarked that Kavanaugh wasn’t on the list,” said Erwin Chemerinsky, the dean of Berkeley Law School. “I remember hearing speculation that he was thought of as more mainstream than other people on the list — he’s got the traditional credentials of people on the Supreme Court.”

And, indeed, Kavanaugh’s credentials are notable. He earned both his undergraduate and law degrees from Yale University and clerked for Supreme Court Justice Kennedy before serving on the U.S. Court of Appeals for the D.C. Circuit.

“Almost any Republican would have likely given strong consideration to someone with Kavanaugh’s credentials, record and likely votes,” Dorf said.

While Trump makes unorthodox decisions on his trade policies, his Cabinet selections and even his political rhetoric, experts say his judicial nominations have been conventional.

“You never can fully predict what Donald Trump might do, but, as I said, if you were to imagine who would be the most predictable product of a process outsourced to the Federalist Society — Brett Kavanaugh is a D.C. insider,” said Anil Kalhan, a law professor at Drexel. “He was practically incubated in the conservative legal movement’s lab.” 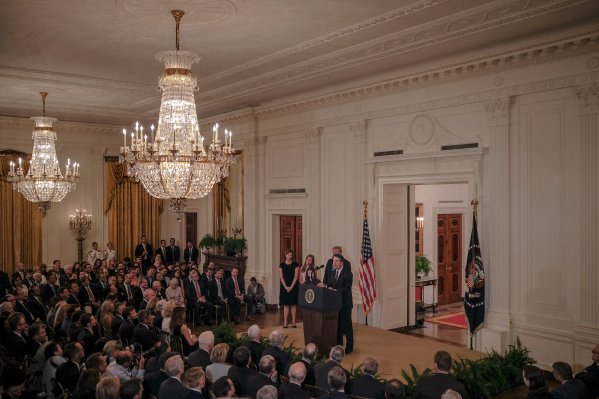 It's Kavanaugh
Next Up: Editor's Pick