Soccer fan Matt Benton made a promise on Twitter—if Harry Maguire, the Leicester City defender who has earned legions of new fans for his performance with the English national team in the World Cup, scored a goal against Sweden, he would get his face tattooed on his chest.

In England‘s quarter final game, Maguire delivered, helping his team seal their 2-1 victory over Sweden and move to the semi-final round of the competition. Benton is a man of his word, apparently, even when that “word” is shouted into the ether of Twitter. On July 9, Benton posted a photo of his brand-new tattoo, which was fresh both literally and figuratively. The tattoo was of Maguire’s face smack dab on Benton’s chest as a beacon of British pride, true soccer fandom, and a sign that Benton keeps his promises.

When he’s not training with his team in preparation for their upcoming match against Croatia, Maguire is active on Twitter and soon after Benton posted the portrait of his favorite soccer player, Maguire saw it. Although he couldn’t believe what it was that he was seeing, as he tweeted in response to the image, adding the self-deprecating comment to Benton that “#YouMustHaveABigChest.” So what do you get the man who just tattooed your face on his chest? Maguire tweeted that for Benton’s “great effort” he would “sort out a signed England shirt from the lads”. Guessing that Benton would prefer Maguire score another goal in his next World Cup match, though. 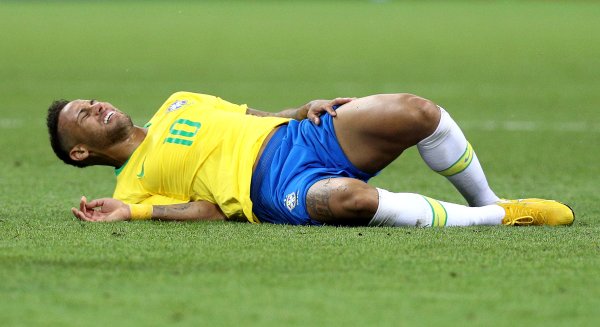 The 'Neymar Challenge' Is Spreading Laughter Across the World
Next Up: Editor's Pick