U.S. Secretary of Defense Chuck Hagel warned China’s Minister of Defense Chang Wanquan against unilateral moves that could escalate tension in the Asia Pacific, amid an ongoing dispute between Beijing and Japan over a group of uninhibited islands that both countries claim.

After touring China’s first aircraft carrier in the eastern city of Qingdao, Hagel arrived in Beijing on Tuesday and quickly took aim at China’s move late last year to establish an air defense zone that included skies over uninhabited isles known as the Senkaku in Japan and the Diaoyu in China.

“Every nation has a right to establish an air defense zone, but not a right to do it unilaterally with no collaboration, no consultation. That adds to tensions, misunderstandings, and could eventually add to, and eventually get to dangerous conflict,” said Hagel, according to the AP.

Hagel had already voiced the U.S. government’s continued support of Japan’s claims to the disputed territory during a press conference in Tokyo on Sunday.

“I restated the principles that govern longstanding U.S. policy on the Senkaku Islands and other islands,” said Hagel. “We affirmed that since [the Senkaku Islands] are under Japan’s administrative control, they fall under Article 5 of our Mutual Security Treaty.”

However, China’s defense chief stuck to the party line and refused to budge over issues of Chinese sovereignty.

“We will make no compromise, no concession, no trading, not even a tiny … violation is allowed,” said Chang on Tuesday, according to AP.

Despite the surfacing of adversarial statements between the two parties at times, the defense bosses also confirmed that cooperation between Beijing and Washington was vital.

“The China-U.S. relationship is essential to peace and stability in the Asia-Pacific region in the 21st century,” said Hagel.

But as Hagel and Chang traded a bittersweet mix of barbs along with a strong helping of diplomatic platitudes in Beijing, the U.S. and Vietnamese navies kicked off the second of six days of planned drills between the former adversaries’ marine forces.

China has ongoing territorial disputes with the Philippines, Malaysia and Vietnam, and much to Beijing’s chagrin, the U.S. has upped naval and economic cooperation with regional powers in a move that Chinese officials view as an effort to bridle the Asian superpower. 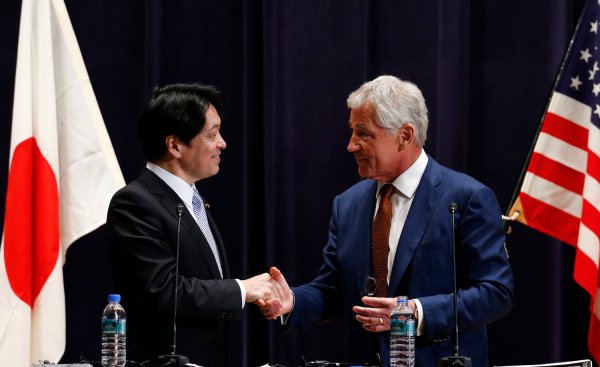 Hagel Schools China on Power
Next Up: Editor's Pick