The Trump-Kim Summit Was a Month Ago. Little Has Changed So Far.

After high-level diplomatic talks with North Korea took a contentious turn over the weekend, the Trump Administration remained optimistic that the isolated nation will disarm its growing nuclear arsenal.

North Korea accused the Administration of having a “gangster-like mindset” on Saturday following U.S. Secretary of State Mike Pompeo’s visit to Pyongyang. The censure was a stark contrast to the Pompeo’s description of the talks as “productive.”

The diplomatic divide served as another indicator that the two long-time adversaries were no closer to détente despite last month’s agreement between President Donald Trump and North Korean leader Kim Jong Un during their historic summit in Singapore. The apparent deterioration in talks came as no surprise to many analysts who say any deal will take months, if not years, to complete.

“It not a revelation that the opening positions of these two nations don’t overlap very much,“ said Thomas Countryman, a 35-year career diplomat who retired last year after leading the State Department’s nonproliferation efforts. “There is bound to be a rift when two nations don’t speak to one another for such a long period of time.”

Many analysts, like Countryman, were skeptical that any real progress had been made between the two countries after the vague language of the summit agreement became public. The one-and-a-half page document had no timetable, no milestones, or specifics on what had to be done. It was a far-cry from the agreement made during the so-called Six–Party Talks in 2005, which ultimately fell apart amid demands for a rigorous inspection and verification regime.

Trump has already made one concession without getting anything in return. The Pentagon suspended all military exercises on the Korean Peninsula, including the annual Ulchi Freedom Guardian, which was set to take place over a two-week period in August and includes 17,500 American forces.

North Korea has yet to make good on its promise to return the remains of 5,300 service members who died during the Korean War. However, it has halted all missile and nuclear tests thus far this year.

Trump tweeted Monday that he had “confidence that Kim Jong Un will honor the contract we signed &, even more importantly, our handshake. We agreed to the denuclearization of North Korea.”

The term “denuclearization,” mean different things to Washington and Pyongyang, analysts say. For the U.S., it means North Korea will abandon its nuclear program and give up its arsenal under what it calls a “complete, verifiable, and irreversible” process. For North Korea, it means the U.S. will abandon its decades-long guarantee to defend a non-nuclear ally South Korea, which has thus far not been discussed.

Robert Carlin, a former CIA and State Department analyst, said there was “from the start, a fundamental disconnect in the two side’s understanding of the outlines of what had been agreed to in Singapore.” But he remained optimistic that the “two sides have made progress narrowing the gap on how the negotiations would proceed, how to measure progress, and how progress on one front can support progress on the others,” he said in a post to 38north.org, a North Korea-focused website that’s affiliated with Washington-based non-profit Henry L. Stimson Center.

White House National Security Adviser John Bolton said July 1 that the bulk of North Korea’s weapons programs could be dismantled within a year. But arms control analysts caution that delivering any sort of blow to Pyongyang’s sprawling missile and nuclear weapon infrastructure will take a herculean, years-long effort — the likes of which have never been seen before. 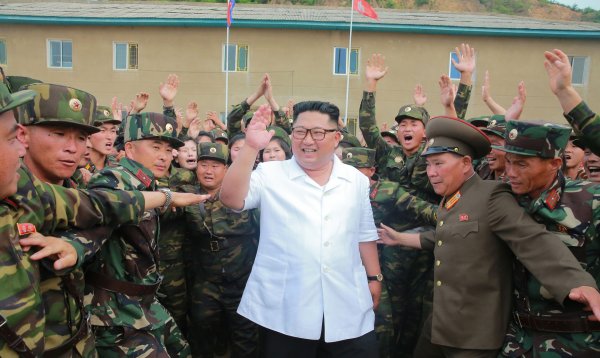 State Department Denies It's Softening on North Korea
Next Up: Editor's Pick