Is Working Remotely Bad for Your Health?

Imagine rolling out of bed in the morning and, rather than racing to get out the door and into morning traffic, you could go for a run or make yourself breakfast. It’s the kind of daydream every chained-to-his-desk office worker has now and then. And for many, that daydream has become a reality.

Following the Great Recession and the rise of the app-driven gig economy, more and more American workers have found themselves jettisoned from traditional office spaces and thrust into jobs that require them to work remotely, at least some of the time.

A 2016 study from Harvard and Princeton found that the percentage of the U.S. workforce employed in freelance or other “alternative” work arrangements climbed from 10.1% in 2005 to 15.8% in 2015. And a recent Gallup poll found that 43% of employed Americans now work remotely at least some of the time—with nearly one-third of them working remotely four days a week or more.

These momentous shifts in the way Americans work have generated a lot of new research on the health effects of remote jobs and self-employment. The latest evidence shows that so-called “alternative” work arrangements come with both benefits and risks.

The good news: Remote workers who are also self-employed are likely to experience greater levels of job satisfaction and wellbeing than their pals in traditional work roles, says Peter Warr, emeritus professor at Sheffield University’s Institute of Work Psychology in the UK. Assuming a self-employed person’s income is adequate—and that’s a very big assumption—her freedom to set her own schedule and complete work as she sees fit is a great predictor of job-related happiness, Warr’s research suggests.

Many people are likely a mixture of both categories. (There are those who may have pondered going it alone, but weren’t willing to make the jump until a lost job forced them into it.) But in any case, Schonfeld says the necessity self-employed folks “may be a little more vulnerable because they may not prefer the autonomy that comes with the job.”

Schonfeld coauthored a recent study on stress among self-employed people who run solo businesses. When talking to the people in the study, he says, the most common complaints he heard had to do with income insecurity. “Not knowing what could happen to their income in two or three months was a big source of anxiety,” he says. Lack of affordable health coverage was also an oft-mentioned concern. “The Affordable Care Act was not perfect, but it was particularly good for the self-employed because at least they could get health insurance,” he says. “If the government takes that away, that’s going to be hard on them.”

Income instability and poor access to affordable health care have both been linked to reduced physical and mental health. There’s also evidence that some freelancers “overcommit” to work and find it difficult to disconnect or relax, which they say negatively affects their mental health. But overall, the health effects of self-employment seem to vary from person to person and—like office jobs—can be either positive or negative.

What about company employees who have traditional roles and benefits, but who do their jobs remotely? Again, the research is mixed.

A recent survey (albeit one conducted by a cloud computing company) found that remote workers are much more likely to exercise and eat right than their office-bound colleagues. There’s also no shortage of evidence linking long commutes to stress, high blood pressure, aches and pains, and other health issues. If remote work gets people out of rush-hour traffic, that’s undoubtedly a good thing.

On the other hand, research from Cornell University finds that remote workers are at greater risk for feeling personally and professionally isolated than their in-office colleagues. Social isolation has been associated with significant increases in both mortality risk and risk for a heart attack or stroke. More research had tied social isolation to depression and problems sleeping.

But for those remote workers who enjoy ready access to friends, family or other telecommuting colleagues, the health risks seem minimal. “I don’t think you can say it’s necessarily more or less healthy,” Schonfeld says of remote work. Both at-home and in-office roles have their pros and cons, and much depends on a person’s unique needs and circumstances, he says.

Based on the literature, it seems like a mix of both work environments might be optimal: a few days in the office each week to collaborate and mingle with coworkers, and the rest at home to grind through work tasks while fitting in time for exercise and healthier meals.

If you can finagle that sort of setup—or one that allows you both a measure of autonomy and regular access to friends or colleagues—consider yourself lucky. 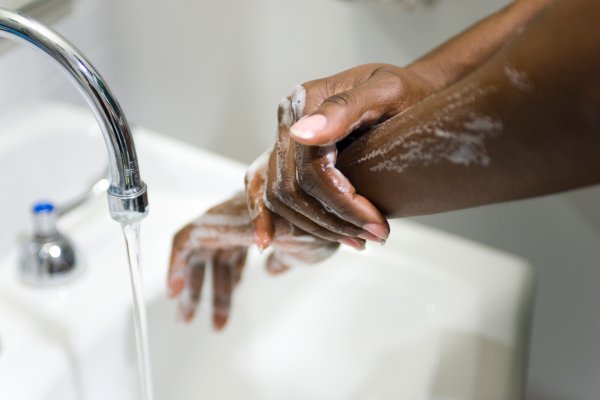 You're Probably Not Washing Your Hands Right, Study Says
Next Up: Editor's Pick