The 'Neymar Challenge' Is Spreading Laughter Across the World

When we think of the World Cup, we think of athletes at the top of their game eliminating the competition for shot at that golden Greek goddess of victory trophy.

But even though world famous soccer great Neymar da Silva Santos Júnior may have lost his chance at leading Brazil to 2018 World Cup glory, he managed to win big in a different way: He became the most imitated player of the tournament, getting people across the world rolling the way he does.

The Brazilian forward’s team was knocked out of the World Cup on Friday after losing 2-1 to Belgium, but star player Neymar is still popping up in everyone’s social media feeds. He’s known for his formidable offense and fancy footwork, but recently he secured his place on the world stage with the hammy way he falls to the ground and rolls around. It’s the stuff of great drama, so his falls on the field inevitably became a meme. Swiss broadcaster RTS even attempted to tally his total time on the match, at 14 minutes.

After making it to the quarterfinals, Brazil is out of the tournament. But people just can’t quit Neymar. The Neymar challenge sees people emulating the player, and the stunts are reverberating across the world.

In fact, whole teams have made videos of themselves imitating his on-field antics with their best “Neymar.” The idea is simple. People shout Neymar and do their best imitation. A Swiss youth club coach, Club Tijuana and countless others have joined in on the craze of imitating the forward’s moves. Belgium fans turned tumbles into a drinking game.

Even dogs are getting in on the fun.

He’s not the first athlete to showcase passion on the field, and he’s certainly given the tournament a major dose of levity. Neymar has yet to address the challenge himself. 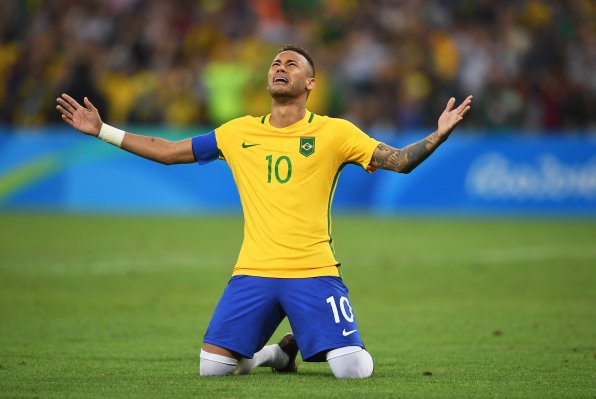 Hilarious Young Soccer Players Had Way Too Much Fun Doing 'the Neymar'
Next Up: Editor's Pick