Thousands Are Expected to Join a 'Carnival of Resistance' in Britain to Protest Trump's Visit. Here's What to Know

President Trump will arrive in Britain on Thursday for a visit during which he will meet Queen Elizabeth, U.K. Prime Minister Theresa May, and also probably play golf at one of his courses in Scotland.

Trump will spend Thursday night at the U.S. Ambassador’s residence in London, but is scheduled to leave the city before up to 200,000 people take to the streets in protest against his visit on Friday.

He will spend time at May’s country residence Chequers on Friday for talks on foreign policy, then visit Windsor to meet the Queen before traveling up to Scotland, where he and First Lady Melania Trump will spend the weekend.

Protest organizers have called for a “Carnival of Resistance” against Trump, with coaches from around the country scheduled to bring people to London to march.

Here’s what to know about the protests.

Why are people protesting?

Organizers say the protests will “make history.” A spokesperson for the campaign group Stand Up to Trump, which is helping to organize the protests, said, “Hundreds of thousands of people have expressed their outrage and opposition to his racism, Islamophobia, sexism, warmongering and climate change denial, and are ready to march together against Trump when he visits.”

Owen Jones, a newspaper columnist and activist who has played a leading role in organizing the protests, told TIME: “We need to show the world what millions of people in this country think of the bigotry and the hatred that he represents.”

“We’ve seen the rise of the far right in Britain and Europe, and the one lesson we should learn from history is that when racists and the far right mobilize, you fight back, you don’t let them march and rise to power,” he added.

How are people protesting?

Lots of smaller groups are expected to join the main protest against Trump, some expressing their discontent in strange ways.

One act of protest which has garnered a lot of attention is the ‘Trump Baby’ balloon, which a group of activists have been given permission to fly next to the Houses of Parliament on Friday morning.

London Mayor Sadiq Khan initially said the balloon, which depicts Trump as a scowling orange baby in a diaper, would not be allowed to fly. However Mayor Khan bowed to public pressure last week after thousands of people signed a petition demanding clearance to fly.

A spokesperson for Mayor Khan said, “The Mayor supports the right to peaceful protest and understands that this can take many different forms.”

Another group expected to join the main protest is a “Drag protest parade,” which nearly 10,000 people have expressed interest in attending on Facebook.

The Queer Alliance, which is helping to organize the parade, said: “We will be standing in solidarity with LGBTQ+ folk, migrants and all marginalized communities whose human rights have been and continue to be violated by [Trump’s] administration.”

And the group Trumpets Against Trump has pledged to “blast fascism” by playing “a drone piece in our lowest notes” at the protest. “We will not play in harmony with each other,” they said. “No practice is needed. The worse the better.”

Police are planning the biggest mobilization of officers since the 2011 London riots, The Guardian reports. This will involve police from outside London being brought down to assist efforts to both safeguard President Trump and manage the protests, in what police are calling “a multi-faceted policing and security operation.”

London’s Metropolitan police refused to say how many protesters they expected on the streets on Friday, but said in a statement: “We are anticipating that people will gather in the capital to demonstrate both for and against the President. The requirements of this complex operation need to be balanced with the right of individuals to freedom of speech.”

Does Britain have a precedent of protesting against U.S. Presidents?

The biggest protest in U.K. history was in February 2002, in response to Britain’s involvement in the impending Iraq War, which was spearheaded by President George W. Bush. Up to 2 million people took to the streets in that march, though Bush was not in the country at the time.

Many in Britain now see that as the low point in the “special relationship” between the U.S. and the U.K., and hope that these protests will warn Theresa May against pursuing similar closeness with Trump.

Owen Jones, one of the organizers of Friday’s protests, told TIME: “We have seen already in the past what happens when we become the poodle of extreme Republican administrations. We lost 189 British service personnel in Iraq, we lost hundreds in Helmand province, that was the so-called ‘blood price’ paid, as Tony Blair put it, for that special relationship. That can never be allowed to happen again.”

He continued, “If, for example, we end up with a march to war with Iran, as John Bolton and others want in the U.S. administration, I think our government will think twice about involving Britain, and paying the so-called ‘blood price’ as we did in Iraq so disastrously.” 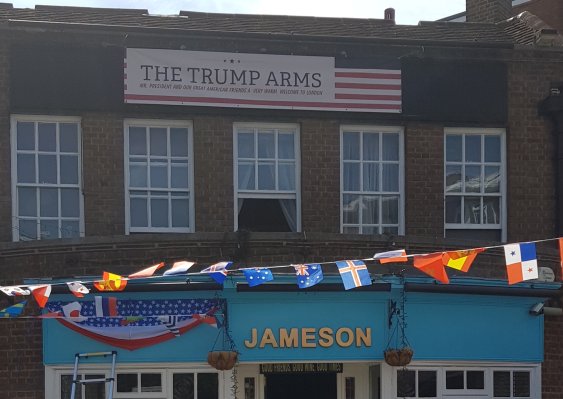 This British Pub Is Turning Into the ‘Trump Arms’ to Honor the President's Visit
Next Up: Editor's Pick