Robin Wright is speaking out about former House of Cards costar Kevin Spacey, months after sexual assault allegations were brought against him.

In an interview with Today‘s Savannah Guthrie, airing on Monday, the actress, 52, opens up about her interactions with Spacey on set of the hit Netflix series.

“Was there any kind of red flag, or anything that would have made you think this was possible?” Guthrie inquires as Wright recalls, “Kevin and I knew each other between action and cut, and in between setups where we would giggle.”

However, when the cameras were off, Wright says she did not interact with him.

“I didn’t really– I didn’t know the man. I knew the incredible craftsman that he is,” she explains.

In October 2017, actor Anthony Rapp claimed Spacey had previously made inappropriate sexual advances toward him when he was just 14 years old.

In response, Spacey, now 58, issued a statement on Twitter addressing the allegations and coming out as gay.

“I have a lot of respect and admiration for Anthony Rapp as an actor. I’m beyond horrified to hear his story,” he said. “I honestly do not remember the encounter, it would have been over 30 years ago. But if I did behave as he describes, I owe him the sincerest apology for what would have been deeply inappropriate drunken behavior, and I am sorry for the feelings he describes having carried with him all these years.”

In November, Spacey entered a treatment facility. He has not been out in public since and has been written off the final season of House of Cards.

Several more people accused Spacey of sexual harassment or assault since, and in April, one sexual assault case against the star reported to have taken place in October of 1992 in West Hollywood involving a male adult was turned over to the Los Angeles County District Attorney’s Office for further review.

London’s Metropolitan Police are investigating Spacey after men separately reported him for separate attacks that allegedly occurred Westminster in 1996, in Lambeth in 2008 and in Gloucester in 2013, according to TMZ.

The Met does not identify people who are subject to investigations until charges have been filed and would not confirm Spacey is being investigated. However, a spokesperson confirmed that officers from the Child Abuse and Sexual Offenses Command are investigating six separate, male-on-male alleged sexual assaults that match the three dates published by TMZ, as well as three dates previously connected to Spacey.

Costar Patricia Clarkson, who debuted as Deputy Undersecretary of Commerce for International Trade Jane Davis in season 5, recently revealed that Wright came to the show’s rescue after Spacey’s allegations were made public.

“It was truly the great Robin Wright rallying,” Clarkson said while promoting her HBO’s Sharp Objects on CBS’ The Talk. “We have beautiful showrunners, Frank [Pugliese] and Melissa [James Gibson], and they killed themselves to rethink the whole show. It’s only eight episodes.”

Season 5 ended with Frank Underwood (Spacey) stepping down from the White House as wife and Vice President Claire Underwood (Wright) assumed the presidency. The sixth and final season of House of Cards was rethought and now Claire will be the main focus.

“Robin led all of this charge so that people would save their livelihoods because when the show goes away some people don’t get paid,” Clarkson added. “I think it’s gonna be a stunning, stunning new season.”

After its hiatus, House of Cards season 6 restarted production earlier this year. Netflix has yet to announce a premiere date but has released brief teasers and photos of Wright back to work.

House of Cards season 6 will be released on Netflix this fall. 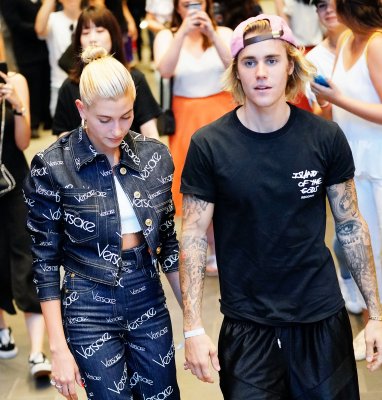 Justin Bieber and Hailey Baldwin Are Engaged
Next Up: Editor's Pick