The two Reuters journalists arrested in Myanmar in December while investigating the brutal army crackdown against Rohingya Muslims in western Rakhine state have pleaded not guilty after a judge ruled that they would face charges under the country’s colonial-era Official Secrets Act.

On Monday, a rainy monsoon morning, Wa Lone and Kyaw Soe Oo arrived at a court in northern Yangon after being transferred from nearby Insein Prison. They walked into the courtroom as they have during dozens of pre-trial hearings, with a handcuffed Wa Lone giving his now-famous thumbs up to the large crowd of family, press and supporters outside the court. Among the throng of people was Kyaw Soe Oo’s young daughter who waited hopefully for her father to arrive.

In a short hearing that lasted less than 30 minutes, Judge Ye Lwin charged the pair for breaching the Official Secrets Act, which carries a maximum penalty of 14 years’ imprisonment. The next hearing is set for July 16. The pair have already spent almost seven months behind bars.

Speaking to reporters after the hearing, a determined Wa Lone said they would “not give up.”

“We are not shaken by the charges, we are innocent,” he said to the crowd.

Read More: Press Freedom Is Under Attack Across Southeast Asia. Meet the Journalists Fighting Back

Wa Lone and Kyaw Soe Oo were arrested outside a restaurant in Yangon in December, and charged with handling government documents supposedly relating to the Myanmar military’s crackdown in Rakhine state that has forced more than 700,000 Rohingya to flee into neighboring Bangladesh since August. The prosecution maintains that the pair were detained during a routine patrol, but the reporters have told their family that they were invited to dinner by members of the police force, where they were handed the documents before being arrested.

At the time of their arrest, Wa Lone and Kyaw Soe Oo were investigating the killing of 10 Rohingya men and boys at Inn Din village, in northern Rakhine state, in September. In February, Reuters published the story, which described how security forces and local Rakhine villagers were involved in the massacre.

Former U.S. Secretary of State Rex Tillerson has said the crackdown “constitutes ethnic cleansing” while the U.N. rights envoy to Myanmar said the campaign bears “the hallmarks of genocide.” Myanmar authorities have largely denied any wrongdoing, although in April seven soldiers were sentenced to 10 years in prison for their role in the Inn Dinn killings.

Government spokesperson Zaw Htay could not be reached for comment.

The prosecution’s case has come under considerable scrutiny after a witness called on behalf of the prosecution, Police Captain Moe Yan Naing, told the court in April that officers had been ordered by their superiors to “entrap” Wa Lone and Kyaw Soe Oo. After his testimony, Moe Yan Naing was sentenced to a year in prison for breaking police protocol, and his family were removed from government housing in the capital, Nay Pyi Taw.

Authorities have denied entrapping the reporters. In June, State Counselor Aung San Suu Kyi told Japanese broadcaster NHK World that the pair “were not arrested for covering the [Rakhine] issue.” Speaking outside the courtroom at a previous hearing on June 18, Wa Lone rebuffed Suu Kyi’s comments. “I want to let the government, especially the state counselor, know this. We were [arrested] for covering Rakhine state,” he said.

Read More: Myanmar’s Case Against Two Reuters Reporters Is a War on the Truth

Defense lawyer Khin Maung Zaw said Monday that the defense team would “hope for the best, but prepare for the worst.” He said four witnesses will be called for the reporters’ defense, including their driver on the night of the arrest.

“If [press freedom] was backsliding, that would mean there has been an advance. It is not getting worse, because press freedom has never improved since the military government,” he said.

The case has also attracted widespread criticism internationally. Matthew Bugher, head of the Asia program for legal advocacy group Article 19, told TIME that the decision to charge the reporters “renders the judiciary complicit in a farcical miscarriage of justice.”

“The ongoing criminal proceedings against Wa Lone and Kyaw Soe Oo underscore the Myanmar government’s wide-ranging efforts to obstruct reporting on the Rakhine state crisis and to whitewash human rights violations by authorities,” he said.

Sean Bain, a legal adviser for the International Commission of Jurists in Yangon said the decision “raises real concerns about the independence and impartiality of the judiciary and prosecution when confronted with politically sensitive cases.”

In a statement Monday, Reuters President and Editor-in-Chief Stephen J. Adler called the trial a “protracted and baseless proceeding.”

“These Reuters journalists were doing their jobs in an independent and impartial way, and there are no facts of evidence to suggest that they’ve done anything wrong or broken any law.” he said. “They should be released and reunited with their families, friends, and colleagues. Today’s decision casts serious doubt on Myanmar’s commitment to press freedom and the rule of law.” 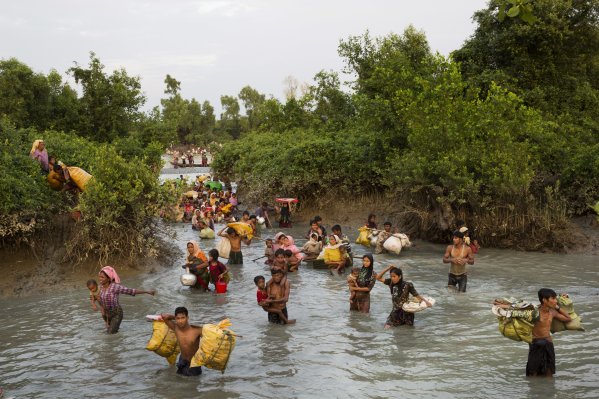 Myanmar Officials Implicated in Rohingya Atrocities
Next Up: Editor's Pick