(BRUSSELS) — President Donald Trump is the wild card heading into this week’s NATO summit, as allies worry about his priorities for the meeting, leadership style and upcoming sit-down with Vladimir Putin on the heels of a rocky G7 summit with some of the same countries last month.

While there’s much on the agenda for the meeting in Brussels, Trump has largely been focusing on one issue: getting all North Atlantic Treaty Organization allies to meet a pledge of 2 percent spending on defense.

In a call with reporters on Thursday, U.S. ambassador to NATO Kay Bailey Hutchison said the defense spending pledge would be the president’s top priority in Belgium.

“What we are looking for to deliver at the NATO summit is of course an emphasis on burden-sharing,” she said, citing that 16 allies are on track to meet the figure.

President Barack Obama also pressured NATO allies to increase their defense spending, and it was under Obama’s leadership at the Wales summit in 2014 that NATO reaffirmed a commitment to move towards the 2 percent guideline. But Trump’s more aggressive approach on the issue has some worried that he will focus on defense spending at the expense of other discussions.

On the call with reporters, after talking about defense spending, Hutchison listed other objectives Trump is invested in at the summit, including a military readiness initiative, NATO command structure reform and a new training mission in Iraq. But the relatively unsexy, multilateral work of the alliance doesn’t play to Trump’s typical strengths or preferences of how to conduct foreign policy.

“These are not the things that make headlines, and Trump likes headlines,” says Charles Kupchan, senior fellow at the Council on Foreign Relations. “He will work the issue that he thinks will cause a stir.”

With Trump crossing allies on multiple issues in recent months, experts say the environment at the summit may not be conducive for Trump to make more progress on his signature goals.

“Is the President just going to focus on defense spending and basically hijack the entire conversation?” says Heather Conley, director of the Europe Program at the Center for Strategic and International Studies. “The atmosphere of this meeting, between the tariffs [and pulling out of] the Iran nuclear agreement, we’re not in a great environment for European countries to support what the U.S. wants.”

If this setup sounds familiar, it’s because just one month ago, some of the same key players in NATO met at the G7 summit in Canada ahead of Trump’s historic sit-down with North Korean leader Kim Jong Un. At the G7 meeting in June, weeks after slapping tariffs on U.S. allies, Trump fiercely criticized Canadian Prime Minister Justin Trudeau for suggesting Canada might impose retaliatory tariffs on the U.S. Then, after engaging in a public spat with one of America’s closest allies, Trump sat down with Kim and declared that he and the dictator have developed a “special bond.”

Similarly, days after the NATO summit this week, Trump will head to Helsinki to meet one-on-one with Russian President Vladimir Putin, another traditionally hostile foreign leader with whom he seems to have an unusual rapport.

“There’s some concern that the optics could be quite problematic,” Kupchan says of this week’s Europe trip, based on what happened in Canada and Singapore. “The conversation in Brussels could be strained and awkward, and then you [could] have Putin and Trump standing shoulder to shoulder and being buddy-buddy.”

Trump arguing with other world leaders or staking out an extreme negotiating position may test interpersonal relationships, but unless Trump makes a more substantive change—like pulling U.S. troops out of Europe, for instance — experts say the true bonds of NATO will likely endure. “It would just be once more a transitory verbal tiff, as opposed to a change in policy, which leads to a true weakening of the alliance,” says John Herbst, former U.S. ambassador to Ukraine, now at the Atlantic Council.

Still, Trump’s “America First” approach to the military alliance that has been in place since the Cold War could already be altering the nation’s relationship to the rest of the globe in ways that might not express themselves for years to come. “The United States has always viewed its network of alliances as a net plus for American security and America’s role in the world,” explains Goldgeier, “and American leadership and has always seen the network of alliances as an advantage in its competition with countries like China and Russia that have very few allies.”

Trump, however, sees NATO as yet another example of a bad deal for the U.S., where allies free ride and take advantage of America’s coffers. At the G7 meeting, Trump reportedly said, “NATO is as bad as NAFTA,” according to Axios. “It’s much too costly for the U.S.” Trump often rails against NAFTA as the worst trade deal ever signed.

Last year, Trump ruffled feathers by refusing to affirm NATO’s Article 5 principle that an attack on one nation is an attack on them all as he scolded other member nations for falling short of the defense spending guideline. (Trump later clarified that he is committed to the principle.)

NATO invoked Article 5 for the first time in its history in the wake of the September 11, 2001 terrorist attack on the U.S., and some worry where Trump’s approach will leave America in the future in case of another crisis. “Heaven help us if the United States wants and needs Europe’s support,” says Conley. “There may be crickets chirping when we need something. … That’s what’s at stake. And this is really where the ‘America First’ moniker is truly America alone.”

The White House is already telegraphing success for this week’s summit and sounding an optimistic tone about the member countries’ ability to work together. “This is a very substantive and meaty summit. I think it is going to be one of the most productive that we have ever had,” said NATO ambassador Hutchison. “And I think that NATO is doing many of the things that the President has asked them to.” 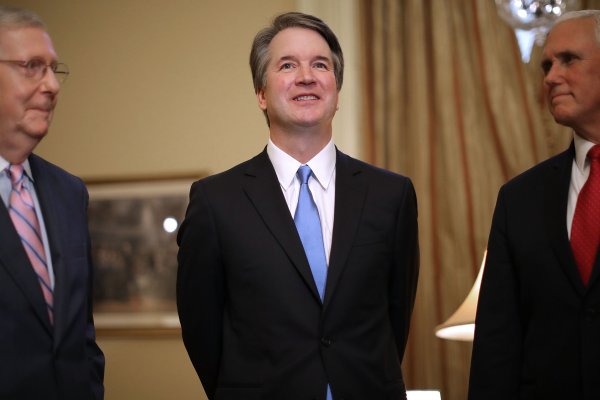 The 7 Senators to Watch on Brett Kavanaugh's Confirmation
Next Up: Editor's Pick