The first four of 12 boys and their soccer coach trapped in a cave in northern Thailand for more than two weeks have been rescued, the leader of the mission announced Sunday as a the last ambulance convoy pulled up at a nearby medical center.

Speaking to reporters at a press conference in Mae Sai, a small town near Thailand’s border with Myanmar, rescue mission chief Narongsak Osottanakorn confirmed that four boys had left the cave. “It’s been 16 days, and today we finally got to see the Wild Boars’ faces,” he said, referring to the name of their soccer team.

Their condition is not yet known, but all four have been taken to Chiang Rai Region General Hospital some 35 miles south of the cave.

Narongsak said that “everything went smoothly,” but it was unclear when the others would be freed. A second group will likely be extracted within the next 10-20 hours. “I cannot say when the next phase will be carried out, we have to wait until conditions are like today,” he said. “We have to see how stable they are and evaluate what we should improve.”

Outside the hospital, helicopters could be seen making their way to a nearby airfield, where ambulances were waiting for the boys.

Rains came pouring down less than six hours after the mission was set in motion. Eighteen divers set off at 10 a.m. local time on a dangerous mission to rescue the junior soccer team, who had been stuck deep inside Tham Luang cave for 16 days.

Speaking to reporters Sunday morning near the entrance to the cave, Narongsak said a difficult dive guided by experts was their best chance of escape as monsoon rains approached. Each boy and the coach are to be accompanied by two highly experienced divers.

“Today is D-Day. We are 100% ready,” he said. “There’s a storm coming and if we wait for the rains, conditions won’t be as perfect as they are now.” Adding that the kids and their families are “fully aware” of the plan, he asked everyone watching the mission around the world to “pray and cheer for our success.”

On Friday, officials announced that a 38-year-old retired Navy SEAL, Petty Officer Samarn Kunan, died from lack of oxygen while delivering tanks along the flooded route. The death of an experienced diver underscored the dangers of the plan to extract the group through the treacherous waterways.

It takes expert divers about six hours to reach the trapped group from a Navy command center that has been set up about a mile deep inside the cave. They take another five hours to return in the fast-moving currents through pitch-black tunnels studded with stalactites and sharp turns. The Thai government released an infographic Sunday explaining that oxygen tanks would have to be removed and carefully rolled through the narrowest parts of the tunnels.

Heavy rains are expected to continue in the coming days while breathable air inside the cave has dropped to concerning levels, hastening the need for their escape. Authorities said Saturday that oxygen had fallen to about 15% — normal safe levels are around 21%, while a drop to 12% could have an effect on brain function. Excess carbon dioxide became an unforeseen concern due to the large number of rescuers spending long hours inside the cave.

The boys, all members of the Wild Boars soccer team between the ages of 11 and 16, and their 25-year-old coach Ekkapol Chantawong were trapped inside Tham Luang cave on June 23 when sudden rains flooded their exit. A monumental search effort involving more than 1,000 people and aided by at least seven foreign governments ended in a burst of jubilation late Monday when a pair of British divers found all 13 alive and in stable health.

But the days since have been a rollercoaster of hope and anxiety as authorities weighed extraction plans, each uniquely perilous. Rescuers were considering three far-from-perfect options of either giving the boys a crash course in cave diving; widening existing holes in the cave’s ceiling and pulling them out from above; or resupplying them with food and other essentials for as long as it would take for waters to recede.

Narongsak, the rescue mission chief, determined that the latter option was “impossible,” as the tunnels are unlikely to dry out before December. 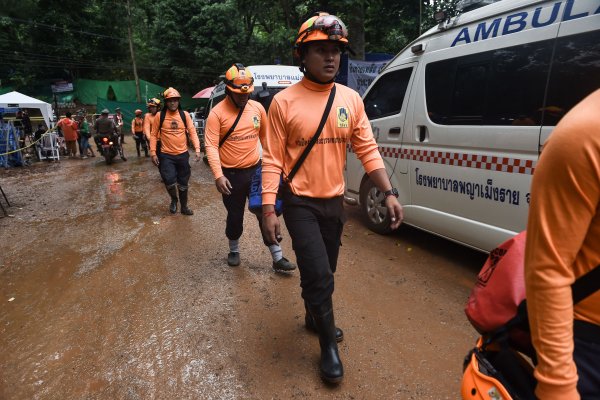 Divers Begin Rescue at Thai Cave
Next Up: Editor's Pick