White House officials had an appointment with their television remotes at 9 p.m. on Saturday. At that hour, they worried, Fox News’ “Justice with Judge Jeanine” might sway Donald Trump’s pick for the Supreme Court and undo everything officials have spent weeks working on.

Trump and the former Westchester County judge are, to be sure, close. But the nervousness inside the Trump orbit this weekend, days before the President is set to announce his nominee to replace outgoing Justice Anthony Kennedy, says as much about the impulsiveness of Trump’s decisionmaking as it does about those who may influence it.

At his private club in New Jersey this weekend, Trump has been consulting with aides and advisers, including Vice President Mike Pence, who flew up to work through the pluses and minuses of each candidate. As Trump likes to do, he is also phoning friends and lawmakers to sound them out about potential contenders.

As of Saturday evening, advisers say, the president had narrowed his list down to four candidates. Raymond Kethledge was the leading contender, although officials stress that Trump has not yet settled on a choice. Trump has been describing Kethledge to aides as “Gorsuch 2.0,” a reference to his 2017 successful nominee, Neil Gorsuch. Trump sees that nomination as one of the high points of his presidency.

Even so, White House officials are preparing rollout plans for all four contenders, which also include Amy Coney Barrett, Brett Kavanaugh and Thomas Hardiman, officials say. Hardiman, however, remains in distant last place.

Kavanaugh had been considered a frontrunner, but his fortunes may be torpedoed by Trump’s grudges. Kavanaugh was a top aide to President George W. Bush, whom Trump loathes. As much as anything, personality drives the current President to action, and Trump has gone out of his way to attack all members of the Bush clan and their aides. When some Twitter users started posting a photograph of Kavanaugh walking with former Bush deputy chief of staff Karl Rove, most of Kavanaugh’s backers saw the writing on the wall given Rove’s criticism of Trump’s conduct as candidate and as President.

Privately, Kavanaugh has found the treatment of his service in the Bush White House troubling, he has told those involved in picking a nominee. But that is unlikely to sway Trump, aides say, and those involved in the process urged Kavanaugh not to dig any deeper with Trump. White House Counsel Don McGahn, a Kavanaugh booster, has largely stopped making the case for his friend, sources say.

Kethledge’s reputation as a writer has intrigued Trump, according to an official briefed on the closed-door sessions with the President. Kethledge’s rulings and his book on leadership have been passed around the West Wing and now Bedminster. Trump hasn’t read much of it, but he likes the idea of a talented writer on the bench.

Trump has also repeatedly asked if Kethledge is “with him” on the issue of religious liberty, a bedrock issue for Christian conservatives who formed part of Trump’s campaign coalition in 2016 and will remain valuable do a 2020 re-election bid. Aides have assured Trump that Kethledge is good on that issue from the White House’s view.

Kethledge also may face one of the easier paths to confirmation, officials have told the President. While he wasn’t Senate Majority Leader Mitch McConnell’s first pick, McConnell can ease his pathway to confirmation.

That’s not the case necessarily with Barrett, who had a difficult confirmation hearing to earn her current seat on a federal appeals court based in Chicago. With the Senate split 51-49—and Republican Sen. John McCain unlikely to cast a vote—that gives Republicans no wiggle room if Democrats remain united as expected on a Barrett nomination. Even then, it’s possible Sens. Lisa Murkowski or Susan Collins could reject Barrett; both female Senators are supporters of abortion rights.

At the same time, the Senate faces a busy balance of the current term. McConnell is holding the Senate in Washington through its typical August recess, in part because it means Democrats facing rough re-election bids can’t go home to campaign, and the chamber’s to-do list remains long. Congress faces an Oct. 1 deadline to fund major pieces of the government, immigration remains a mess and there are talks in some circles of another round of tax cuts.

A difficult or failed Supreme Court nomination would only throw the Senate into further disarray, Senate leaders and White House aides have told the President. In an opinion piece published Friday in The Deseret News, retiring Sen. Orrin Hatch of Utah warns of the Democratic response to any nominee: “The coming meltdown on the left is sure to be as sensational as it is predictable.”

One option that some of Barrett’s boosters at Bedminster have suggested is to hold her in case the seat currently held by 85-year-old Ruth Bader Ginsburg becomes available. A successor for Ginsburg from the same gender may blunt some of the criticism, even though the ideological bent could not be more different.

Officials still describe the President’s choices as “a jump ball” that may ultimately come down to his gut. But he has told those he has called that he had a very good interview with Kethledge and liked him quite a deal. At the same time, those meeting with Trump say he’s very much focused on picking someone that will energize his base, win confirmation and be a consistent and conservative voice for decades. Trump likes his final four, but isn’t ready to commit.

On Saturday, as officials shuffled off to dinner and away from Bedminster, many set reminders that they need to be in front a TV by 9 p.m. There is no telling what new idea or inclination Pirro may plant, they glumly noted. But with a president as unpredictable as Trump, Pirro may provide as good a sign as any of where the President is likely to finish his weekend.

One official says Trump, ever the showman, has asked if they can do television ads promoting the nominee. As a reminder of just how much Trump values theatrics, he has scheduled the unveiling of the nominee for 9 p.m. on Monday. 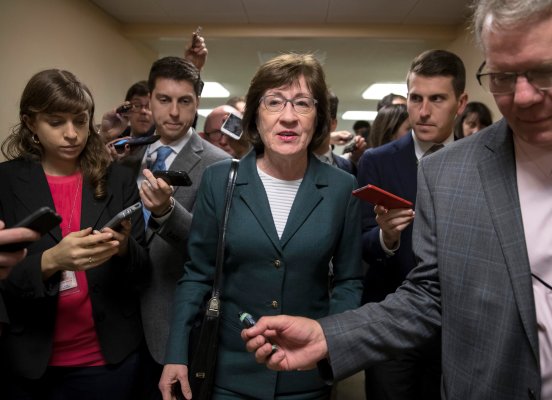 Democrats Target Collins and Murkowski on Supreme Court Vote
Next Up: Editor's Pick