The evacuation of a young soccer team and their coach trapped in a cave in northern Thailand for more than two weeks began on Sunday, officials said.

Thirteen foreign divers and five Thai Navy SEALs entered the cave at 10 a.m. local time, where they will attempt to extricate the boys one at a time by a dangerous dive through flooded tunnels, rescue mission chief Narongsak Osottanakorn told reporters at a press conference near the site on Sunday. It may take two to three days to free all 13 people.

“Today is D-Day. We are 100% ready,” Narongsak said. “There’s a storm coming and if we wait for the rains, conditions won’t be as perfect as they are now.” A heavy downpour stirred anxiety the night before. On Sunday morning, thick clouds hung overhead as light rain fell on the mountain and corn fields below.

“We sent in a medic yesterday, they are mentally and physically ready; we’ll never be as ready as we are today,” he said, adding that the kids and their families are “fully aware” of the plan. “We ask everyone to pray and cheer for our success.”

The lead rescue official, who served as governor of Chiang Rai province until a preplanned transfer last week, said the boys and their coach will be moved using a common cave exploration method called “buddy diving,” chaperoned by experts who will navigate them through the waters. Each boy will be accompanied by two “buddies.”

On Friday morning, Thai authorities announced that a 38-year-old retired Navy SEAL, Petty Officer Samarn Kunan, died from lack of oxygen while delivering tanks along the flooded route. That the first fatality of the fraught mission was an experienced diver underscored the dangers of the plan to extract the group through the treacherous waterways.

Heavy rains are expected to resume in the coming days, while breathable air inside the cave has dropped to concerning levels. Authorities said Saturday that oxygen had fallen to about 15% — normal safe levels are around 21%, while a drop to 12% could have an effect on brain function. Excess carbon dioxide is also a concern. As of Friday, a tube was being laced through the submerged passages to allow more oxygen in, as officials acknowledged for the first time that a back-up plan to keep the group inside for months if necessary may not be viable.

“Whatever we decide to do, we have discussed it with a lot of people, hundreds of experts,” Narongsak told reporters on Saturday. “We’re still at war with the water, and with time; when we found them we had won one battle, but we still have to rescue them to win the war.”

The 12 boys between the ages of 11 and 16, members of the Wild Boars soccer team, and their 25-year-old coach were trapped inside Tham Luang cave on June 23 when sudden rains flooded their exit. A monumental search effort involving more than 1,000 people and aided by at least seven foreign governments ended in a burst of jubilation late Monday when a pair of British divers found all 13 alive and in stable health.

But the days since have been a rollercoaster of hope and anxiety as authorities weighed extraction plans, each uniquely perilous. Experts have said it may be too early to attempt a dive or properly train some of the team, who can’t even swim. The boys are weak after surviving on only a few snacks made to last the nine days it took rescuers to find them.

Video released Wednesday by the Royal Thai Navy showed them gaunt and wrapped in heat-retaining blankets. But Narongsak said Saturday that all of them were gaining strength after being fed on high-protein energy gels. In handwritten letters delivered by Thai Navy SEALs, each boy and the coach said they were in good health and high spirits, eager to go home.

Weather conditions were said to be the determining factor in which method of escape would be chosen — authorities were weighing three far-from-perfect options of either giving the boys a crash course in cave diving; widening existing holes in the cave’s ceiling and pulling them out from above; or resupplying them with food and other essentials for as long as it takes for waters to recede. Narongsak determined that the latter option was “impossible,” as the tunnels are unlikely to dry out before December.

The saga of the trapped team has gripped the nation and captured sympathies across the globe. SpaceX founder Elon Musk entered the fray Saturday, sending a team of engineers to assess the situation and possibly design an “escape pod” or inflatable air-locked tube through which the team could exit. Musk acknowledged on Twitter that the latter idea was less likely to work given the cave’s topology, and it’s unclear how long either might take to design, test and implement.

Time is of the essence; even delivering provisions is difficult and could be further complicated by more rain. It takes expert divers roughly six hours to reach the trapped group from a Navy command center that has been set up about a mile deep inside the cave. They take another five hours to return in the fast-moving currents through pitch-black tunnels studded with stalactites and sharp turns. Divers have to remove equipment to squeeze through some narrow openings, while a few have already been widened to allow easier passage.

“Rescuing kids from inside a cave is not something that we normally do, it’s new to everybody,” Ivan Karadzic, a Danish diver who volunteered on parts of the mission, told TIME, “there’s no established method that’s the best.” Upon his last dive in the cave Thursday, he said visibility was still “very bad,” and the route is difficult to navigate even for expert cave divers with thousands of hours under their belt. “Teaching the kids to dive is simple,” he said, “but keeping them submerged for hours is going to be very complicated.” 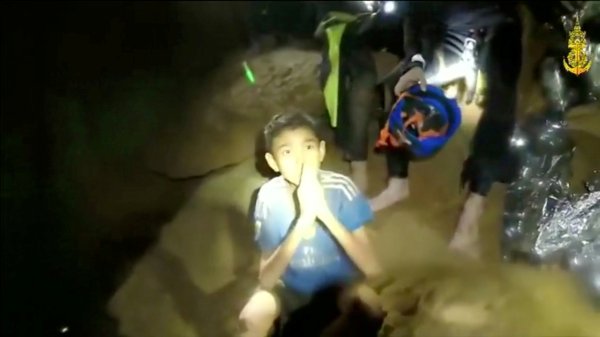