How Trump Could Actually Make the Summit with Putin a Success

U.S. President Donald Trump chats with Russia's President Vladimir Putin as they attend the APEC Economic Leaders' Meeting, part of the Asia-Pacific Economic Cooperation (APEC) leaders' summit in the central Vietnamese city of Danang on November 11, 2017.
Mikhail Klimentyev—AFP/Getty Images
Ideas
By Evelyn Farkas
Farkas was the Deputy Assistant Secretary of Defense for Russia/Ukraine/Eurasia from 2012 to 2015. She is a senior fellow at the Atlantic Council.

Despite the best interests of the United States, our allies and the international order, President Trump will meet with Vladimir Putin on July 16. Given the president’s unwarranted and inexplicable praise for Putin and his approach at the summit with Kim Jong Un, we can expect him to attempt a charm offensive. This may have worked with the North Korean leader—though the jury is still out—but is sure to have little to no positive impact on the Kremlin’s policy and actions on issues of national security interest to the United States. In fact, sweet-talking Putin would likely lead him to charge ahead with actions inimical to U.S. national interests: re-establishing a 19th century sphere of influence for Russia, overturning the United Nations Right to Protect innocent civilians against despotic leaders, and pressuring the international community to release Russia from sanctions.

Even a cursory study of Vladimir Putin’s Kremlin and of U.S. policy toward Russia under the last two American presidents quickly shows that the Russian government deals only according to its interests and halts its military offensives and other disruptive actions only when faced with resistance. And right now the Kremlin sees most of its interests diverging from those of Washington.

That doesn’t mean diplomacy is a bad idea. But in an ideal world, during the meeting with his Russian counterpart, Trump would firmly lay out what the United States expects from Russia and the further potential costs to the Kremlin of its anti-status quo, disruptive international behavior. Considering U.S. interests, here’s what Trump should do to make the summit a success.

First, he would make an ultimatum, informing Putin that if the Russian government continues to meddle in U.S. democracy via cyber hacking, social media, money, bribery or any other new creative means, the United States will beef up existing sanctions on Russia to the “extreme,” akin to sanctions against North Korea and Iran. The U.S. government would also consider additional proportional responses.

The president would next inform his counterpart that the United States and the 68-state coalition fighting ISIS in eastern Syria will not leave until a transition plan to replace dictator Bashar Assad is in place. Keeping Assad in place will not provide the Syrian government with sufficient credibility to actually govern the entire population, which is ultimately the best way to counter extremism. Only by using the leverage we have through U.S. ground presence and military potential, will we have a shot at a compromise that ensures Assad leaves the scene, fighting dies down, and Iran’s influence is curtailed—especially relative to Israel.

In this ideal situation, Trump would also defend the principle of inviolability of borders. He would remind Putin that the bulk of existing international sanctions on Russia are because of the Kremlin’s military invasions and occupations. At issue is the territorial sovereignty of Ukraine, following Russia’s annexation of the Crimean peninsula from Ukraine in 2014. There’s also Georgia, where 20% of its internationally-recognized territory is under Russian occupation; and Moldova, where Russia has deployed about 2,000 Russian troops in the Transnistria region for the last 25 years. Until Russian troops are withdrawn, at the very least from Ukraine, sanctions will not only be maintained, but tightened over time. The president would also clarify that the NATO alliance will respond to any attack—even a cyber attack on civilian targets or one conducted by special operators disguised as civilians.

The latest news of the death of a British woman should also be on the agenda. Dawn Sturgess and her boyfriend were poisoned by a powerful chemical agent, the same substance used to poison former Russian spy Sergei Skripal and his daughter in March—an attack that Britain believes Russia carried out. President Trump should reiterate international protest against the roughly 16 attempted or actual assassinations of Kremlin opponents in the United Kingdom and elsewhere outside of Russia, likely including the death of Mikhail Lesin in Washington D.C. in 2015.

President Trump would then, with some relief, seize the opportunity to agree with the Kremlin—by asserting the dangers of the new nascent nuclear arms race. Of course, it was started by the Kremlin with its violation of the Intermediate Nuclear Forces Treaty during the Obama administration, and exacerbated with Putin’s declared intent this year to develop a nuclear cruise missile, a nuclear stealth missile and underwater drones. It is moreover, alarming in the context of the Russian military doctrine which adopted first-use of nuclear weapons in 2010, authorizes use of nuclear weapons in the case of a threat to the existence of the Russian Federation, and calls for escalation—potentially by cyber, tactical nuclear or special operations strike—to scare adversaries off the battlefield. But the president could concede it is only under pressure from Russian actions that he has begun to counter by approving the Pentagon’s plan to develop new low-yield nuclear weapons.

The president would also validate Moscow’s concerns about the military balance between Russia and the United States, and about increasing Chinese strategic nuclear forces. He would call for high-level bilateral and multilateral talks on these issues.

If only he would, though. For if President Trump fails to set these clear limits for the Kremlin, and all he does is backslap, alarm our European allies, and provide an international spectacle, you can expect the Kremlin to test NATO and U.S. resolve. In that case, we’d expect Russian-backed demonstrations in the Baltic states, Russian troop movements in Georgia, Moldova and Ukraine, more support to Afghan forces fighting the U.S. and NATO-led coalitions, and not least, ongoing and increased cyber, financial and other intrusions in U.S. democracy. That would make the summit another win for Putin, normalizing and emboldening him and his Kremlin kleptocrats. 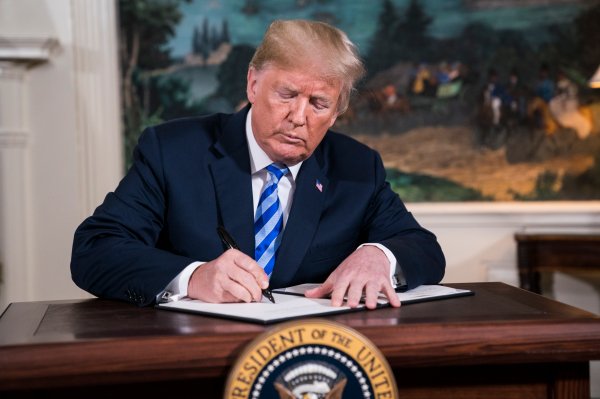 Another Death Knell for the Iran Nuclear Deal
Next Up: Editor's Pick