Hurricane Beryl became the first such storm of the 2018 Atlantic season early Friday as it strengthened while moving westward.

Beryl is an unusually small hurricane, a characteristic that forecasters at the National Hurricane Center say make it difficult to measure and predict.

“Due to its very small size, there is greater-than-usual uncertainty in the analysis of Beryl’s current intensity,” the NHC forecaster’s discussion of the storm said. “Confidence in the official intensity forecast is also much lower than normal.”

Still, the NHC said Hurricane Beryl will likely lose steam before hitting the Lesser Antilles, a group of Caribbean islands, where residents can expect “some rain and wind impacts.” As it stands, Beryl is unlikely to be a significant threat elsewhere.

The original version of this story misstated the organization that runs the GOES-16 satellite. It is the National Oceanic and Atmospheric Administration (NOAA), not NASA. 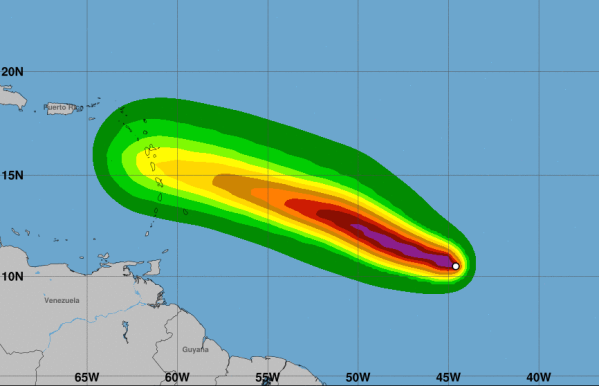 Hurricane Beryl Is First of Atlantic Season
Next Up: Editor's Pick