July 6 - The Jameson pub in London has rebranded as the "Trump Arms" to honor the President, who visits the U.K. next week
Damien Smyth
By Billy Perrigo/London

A London pub is rebranding itself the “Trump Arms” to honor President Donald Trump when he visits the U.K. next week, a rare show of appreciation in a capital city where Trump’s visit is expected to be met by thousands of protesters.

The landlord of the Jameson pub, Damien Smyth, 53, told TIME it was his “duty to do something positive” to greet the President, who lands in the U.K. on Thursday. Over 200,000 people have expressed interest in attending protests against Trump in London the following day.

Smyth’s inspiration to create the Trump Arms came after conversations with customers who, he said, “were appalled that all there was for the President’s arrival was protests.”

“It’s disgraceful,” he told TIME. “America is our greatest ally and the most powerful country in the world, and we are treating the American people and the American President like this.”

The Trump Arms will be adorned with a banner displaying the pub’s temporary name for the duration of the visit. It will also hold a “welcome party” for the President, serving cheeseburgers, hot dogs and Trump-themed cocktails.

“Trump is a very astute businessman, and he’s looking at this situation,” said Smyth. “If the people of this country have no regard for him or his people, he’s not going to have a huge amount of respect for Britain from here on.”

“When the ordinary Joe in America looks and sees how disgracefully we’re treating their democratically elected President, it won’t be good for this country,” he added.

London Mayor Sadiq Khan on Thursday gave permission for a giant balloon portraying Trump as an orange baby in a diaper to fly above capital during the protests.

“This is not a protest against America or Americans,” Leo Murray, the creator of the balloon, told TIME in London when it was first unveiled. “This is a protest against what Donald Trump is turning America into.”

Nevertheless, Smyth believes the balloon, and the protests more generally, will damage Britain’s relationship with the American people. “If we had a similar situation where there was a degrading balloon of Theresa May put up in New York and Washington, the revulsion in this country would be astounding. It’s respect and manners. For an old ally, an old friend.”

British Prime Minister Theresa May was the first world leader to extend an official invitation to Trump soon after the President’s inauguration. But the visit was delayed, rescheduled and downgraded from a state visit to a “working visit” without the typical pomp and ceremony.

Many speculated that Trump’s reason for cancelling a visit scheduled for February was to avoid facing mass protests. However, Trump said in a tweet that his reason was in fact dissatisfaction with the location of the new American embassy in London.

With less than a week to go before the visit, the President’s official schedule has still not been made public. 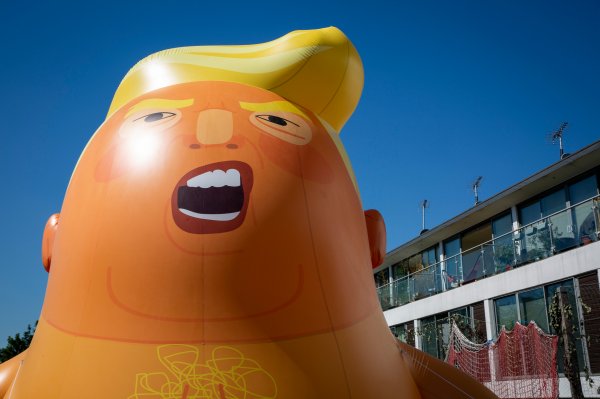 Giant 'Trump Baby' Will Fly Over London During President's Visit
Next Up: Editor's Pick