'We Have Limited Time.' Thai Authorities Race Against the Rains to Free Soccer Team Trapped in a Cave

Stakes were raised Friday in the desperate effort to rescue 13 people trapped in a cave in northern Thailand as news that a former Thai Navy SEAL died on the mission was delivered under approaching storm clouds.

Thai authorities said the retired diver, 38-year-old Petty Officer Samarn Kunan, was volunteering to help distribute oxygen tanks throughout the flooded tunnels when he ran out of air for himself. The first casualty of a mission that has gone on for almost two weeks has underscored the dangers of a plan to extract the group by teaching them to dive.

But heavy rains are expected to resume in the coming days, while oxygen inside the cave has dropped to concerning levels. Authorities said Friday that a tube is being laced through the flooded passages to allow more oxygen in, but expressed for the first time that a back-up plan to keep them inside for months if necessary may not be viable.

“This mission is very tough,” Navy SEAL Commander Rear Adm. Arpakorn Yukongkaew told reporters under the thick clouds that gathered after two crucial days of sunshine that allowed some water to be pumped out. “We thought they would be able to stay there for a while, but conditions have changed and we have limited time.”

Twelve boys between the ages of 11 and 16, members of the Wild Boars soccer team, and their 25-year-old coach were trapped inside Tham Luang cave, one of Thailand’s longest and most complex, on June 23 when sudden rains flooded their exit. The team was planning to have a birthday picnic for one of the players after practice. None of them know how to swim.

A monumental search effort involving more than 1,000 people and aided by at least seven foreign governments ended in a burst of jubilation late Monday when a pair of British divers found all 13 alive and in stable health. But the days since have been a rollercoaster of hope and anxiety as authorities weigh extraction plans, each uniquely perilous. Rescuers are now in a race against time to get them all out before further complications.

Weather conditions will be the determining factor in which method of escape is pursued — authorities are weighing three far-from-perfect options of either giving the boys a crash course in cave diving; widening existing holes in the cave’s ceiling and pulling them out from above; or resupplying them with food and other essentials for as long as it takes for waters to recede.

Thai soldiers and police gather in the mountains near the Tham Luang cave at the Khun Nam Nang Non Forest Park in Chiang Rai province on June 30, 2018 as the rescue operation continues for the children of a football team and their coach.
Lillian Suwanrumph—AFP/Getty Images

Even delivering provisions is difficult and could be further complicated by more rains. It takes expert divers roughly six hours to reach the trapped group from a Navy command center that has been set up about a mile deep inside the cave. They take another five hours to return in the fast-moving currents through pitch-black tunnels studded with stalactites and loaded with sharp turns. Divers have to remove equipment to squeeze through some narrow openings, while a few have already been widened to allow easier passage.

“The visibility in the water is still very bad,” Ivan Karadzic, a Danish diver volunteering on the mission, tells TIME. Expert cave divers who have spent thousands of hours underwater find the trip arduous. “Teaching the kids to dive is simple, but keeping them submerged for hours is going to be very complicated.”

It may still be the best option. Karadzic says local children from nearby villages have volunteered for test dives in lakes and rivers near the site, where rescuers are experimenting with options. They could try to push and pull the boys through the tunnels, with two or three SEALs helping each one navigate. At this desperate stage, all options are on the table.

It’s too early to attempt a dive as the boys are malnourished after surviving on only a few snacks made to last the nine days it took rescuers to find them. Video released by the Royal Thai Navy showed them gaunt and wrapped in heat-retaining blankets. The Governor of Chiang Rai province, Narongsak Osottanakorn, said Thursday that three of them are still very weak but in stable condition.

Helicopters circled overhead as light rain fell in the early afternoon, still searching for alternative entries. Police and soldiers patrol the jungle overhead for chimneys and fissures that could be widened enough to drop supplies and climbers down into the chamber as reality sets in that the boys and their coach cannot stay where they are indefinitely.

“These conditions are unprecedented,” Karadzic said. “To my knowledge, there has never been a situation like this before.” 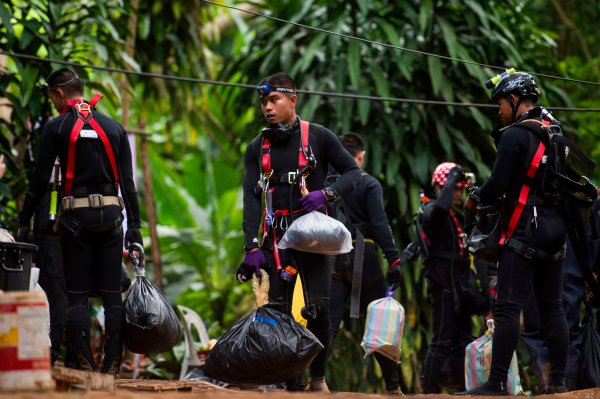 Thai Diver Dies During Rescue Mission
Next Up: Editor's Pick