U.S. President Donald Trump gestures to the crowd after speaking at a salute to service dinner at the Greenbrier Resort on June 3, 2018 in White Sulphur Springs, West Virginia.
Mark Wilson—Getty Images
By Nash Jenkins

In a series of tweets on Thursday morning, President Donald Trump again called for removing immigrants who cross the border illegally without providing them with legal recourse.

“Law Enforcement at the Border is doing a great job, but the laws they are forced to work with are insane,” Trump wrote, after demanding that Congress pass “smart, fast and reasonable” immigration laws. “When people, with or without children, enter our Country, they must be told to leave without our Country being forced to endure a long and costly trial. Tell the people ‘OUT,’ and they must leave, just as they would if they were standing on your front lawn.”

This is not the first time Trump has suggested stripping immigrants of their due process rights. On June 24, he tweeted that when they “invade” our country, the U.S. “must immediately, with no Judges or Court Cases, bring them back from where they came.”

Legal experts were quick to note that this would be unconstitutional. Steve Vladeck, a professor at the University of Texas School of Law, cited a Supreme Court opinion from 1982 that held that “aliens, even aliens whose presence in this country is unlawful, have long been recognized as ‘persons’ guaranteed due process of law by the Fifth and Fourteen Amendments.”

Trump also repeated a claim that the U.S. has hired or plans to hire “thousands of ‘judges'” to handle the task of arbitrating. That is incorrect. As Politifact has noted, there are fewer than 400 immigration judges across the U.S. 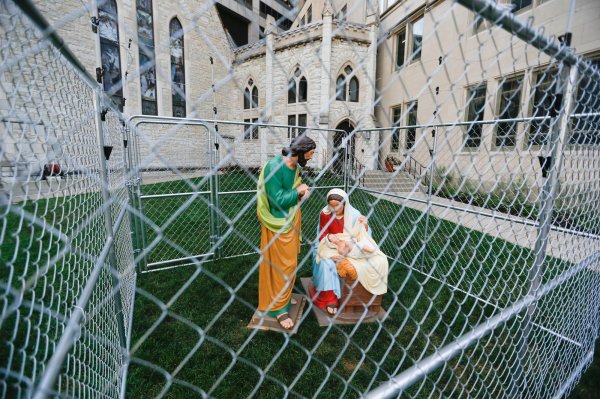