A woman cries as she and others attend a vigil for their loved ones, who were on the missing Malaysia Airlines Flight 370, at a hotel in Beijing on April 8, 2014
Andy Wong—AP
By Charlie Campbell

No further signals have been detected from the southern Indian Ocean, where Malaysia Airlines Flight 370 is thought to have crashed, but ships will continue to scour the area for several days as investigators attempt to narrow any potential submarine search area for the aircraft’s black box.

Australian vessel Ocean Shield detected two signals over the weekend — one lasting for two hours, 20 minutes and another for 13 minutes — but has been unable to do so since. The batteries of the flight-and-data recorders’ beacons only last for around 30 days, and Tuesday marks Day 32 since the jet’s disappearance.

Nevertheless, sweeps would continue until investigators have “absolutely no doubt that the pinger batteries will have expired,” Angus Houston, head of the Australian agency coordinating the search, told reporters at the Royal Australian Air Force’s Base Pearce near Perth on Tuesday, describing “very slow, painstaking work.”

“If we can get more transmissions we can get a better fix on the ocean floor, which will enable a much more narrowly focused visual search for wreckage,” he said, adding that to perform such work with current data would take “many, many, many days.” The ocean is around 2.8 miles (4.5 km) deep at the search zone — or the height of 12 Empire State Buildings.

Fourteen aircraft, 14 ships and several helicopters set out on Tuesday to scour some 30,000 sq. miles (77,700 sq km) of ocean — roughly the size of South Carolina — for wreckage from the twin-engine, 200-ton jetliner, despite nothing being discovered from 133 previous missions.

MH 370 vanished shortly after taking off from Kuala Lumpur bound for Beijing at 12:41 a.m. on March 8. Analysis of data pings indicates the aircraft performed a U-turn over the Malay Peninsula before turning south toward the Indian Ocean, skirting the airspace of Indonesia and possibly running out of fuel some 1,000 miles (1,600 km) northwest of Perth.

“This is the most positive lead we’ve had, and we are pursuing it aggressively,” Australian Defense Minister David Johnston told reporters on Tuesday. “We’ve been doing calculations from [British satellite firm] Inmarsat that have never been done before.”

While black boxes are supposed to transmit signals of 37.5 Hz, those received by the Ocean Shield were distinctly lower than this. However, water pressure at excessive depths combined with a depleted power supply could account for this discrepancy, say officials.

On Monday evening, family members of those aboard the doomed flight conducted a prayer vigil in Beijing. Of the 227 passengers, 153 were Chinese nationals.

Remarkably, Malaysian Defense Minister Hishammuddin Hussein had earlier suggested that some passengers might still be alive. “Miracles do happen,” he told a media briefing in Kuala Lumpur. “We continue to hope and pray for survivors. We are just hoping against hope.”

This contradicts a message from Malaysia Airlines sent to relatives two weeks ago via text message. “Malaysia Airlines deeply regrets that we have to assume beyond any reasonable doubt that MH 370 has been lost and that none of those on board survived,” the carrier said.

According to Jason Middleton, an aviation professor at the University of New South Wales in Sydney, “the chance of getting a plane down in the Southern Ocean is about zero.”

He points out that U.S. Airways Flight 1549, which performed an emergency landing on the Hudson River in 2009, still had its engines ripped off despite it being a calm day with ideal weather conditions, tranquil water and little wind.

“In very perfect conditions people can get out,” Middleton tells TIME. But with MH 370, “you’re talking about night, gnarly waves several meters big and strong winds. They are going to be hypothermia in six hours, drowned in eight. I don’t see any real chance that there would be any survivors.” 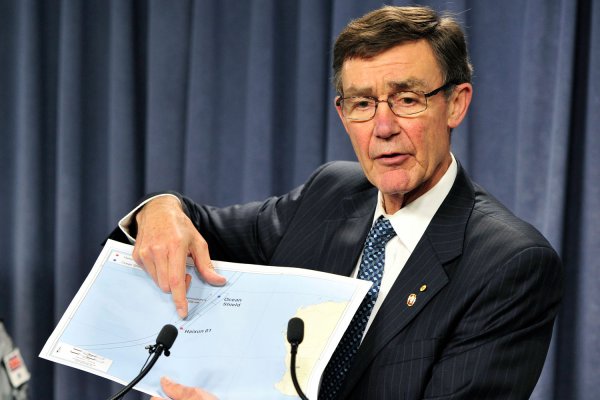 Signals Give 'Best Lead Yet'
Next Up: Editor's Pick