Mexico's New President AMLO and Donald Trump Have Promised Mutual 'Respect.' How Long Can That Last?

The election of Andrés Manuel López Obrador on Sunday marked a historic moment for the Mexican left—and a potential shift for U.S.-Mexico relations. Since U.S. President Donald Trump took office, tensions have risen between the countries. Now, relations could be strained even further.

Mexico voted for their new president with hope for real change. And when he takes office in December, AMLO—as the president-elect is known—will have to please those who voted for him. That includes standing up to Trump.

Nevertheless, the pair began by exchanging a series of messages that demonstrated an apparent will to establish a renewed “respectful” relationship between the countries. On Sunday night, Trump tweeted: “Congratulations to Andres Manuel Lopez Obrador on becoming the next President of Mexico. I look very much forward to working with him. There is much to be done that will benefit both the United States and Mexico!”

Lopez Obrador, often called by his initials AMLO, told a Mexican television network that Trump’s tweet was “very respectful” and that Mexico was “never going to disrespect the U.S. government because we want them to respect us.”

Do these communications mark an end to the tensions that have come between the countries since Trump’s presidency? In reality, Mexico has always been respectful of Trump and the U.S. government. In fact, in the eyes of many Mexicans, Mexico has been too respectful. These tensions were not started by Mexico, but were sparked by repeated comments by the U.S. President that were offensive both to Mexico and Mexican nationals everywhere. Indeed, AMLO has compared Trump’s attacks on Mexicans to the way Hitler and the Nazis talked about Jews and called the American president “erratic and arrogant.”

Will Trump change his attitude, rhetoric or policies toward his southern neighbor now that Mexico will have a new president? That’s hard to imagine. Trump has a political agenda and support base committed to a “big, beautiful wall.” This commitment appears inherently and unmistakably anti-Mexican.

AMLO’s critics and much of the international media have portrayed AMLO as a populist, similar to Trump both for his populism and his personality. For some, one is an economic elite of the far right, while the other is a representative of the nefarious Latin American new left. (In critics’ eyes, this is best symbolized by the late Venezuelan President Hugo Chavez).

Yet this is a false equivalency. Though we must wait and see what type of president AMLO will be in action, the president-elect seems best understood as a pragmatic nationalist who has expressed clearly that he will govern for all Mexicans, rich and poor, seeking a national “reconciliation.”

We also must wait and see what type of relationship the United State and Mexico will eventually have with Trump and AMLO as their presidents. Both men recognize a need to re-negotiate NAFTA, with the aim of benefiting their respective countries. In these negotiations, new tensions are sure to surface.

But the main question in the new era of AMLO and his party, Morena, will be whether Mexico-U.S. border security and anti-narcotics cooperation will maintain the close cooperation established over the past 12 years. It currently seems unlikely that under AMLO, Mexico will maintain its current drugs and security policies—which have come to ally closely with U.S. anti-narcotics policies and hemispheric security interests.

It is difficult to see AMLO continuing his predecessors’ security policies and anti-immigration efforts on Mexico’s southern border. It is even harder to see a new version of the Merida Initiative or a Southern Border Plan 2.0. Under AMLO, it seems almost impossible that Mexico will permit the direct operations of U.S. law enforcement agencies in Mexican territory, or allow for the same type of intelligence and information sharing that had come to prevail under the previous PAN and PRI administrations.

And what to make of Trump’s propensity for erratic behavior in matters involving Mexico? In his quest to please his support base, President Trump will surely still insist on building a wall, persisting in his claims that Mexico will pay for it.

A majority of Mexicans seem to have tired of being “America’s backyard.” In the event that President Trump continues his harmful and hurtful rhetoric and policies against Mexico and Mexicans, AMLO will have no choice but to take a strong stance.

But in taking that stance for his own support base, AMLO might find a historic opportunity: building bridges with Mexico’s southern neighbors, and perhaps also emergent powers such as China. In so doing, perhaps Mexico could become a front yard of the world. 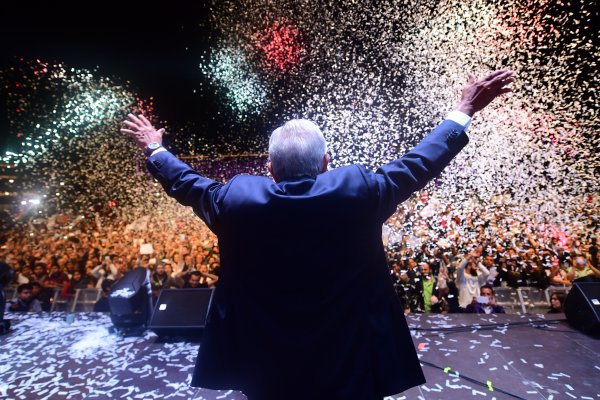