Five Killed in Latest Mob Attack After Rumors on Social Media. Here’s What to Know About India's WhatsApp Murders

Mohinidevi Nath displays a photo of her cousin Shantadevi Nath, who was killed by a mob that falsely believed she was intent on abducting children, on the outskirts of Ahmedabad in India's Gujarat state on June 27, 2018.
Sam Pamthaky—AFP/Getty Images
By Eli Meixler

Nearly two dozen people have been arrested in connection with the mob killing of five men in northwestern India believed to be triggered by a WhatsApp rumor. It’s the latest in a string of attacks sparked by unconfirmed reports disseminated on the popular messaging app.

Police in India’s west-central Maharashtra state apprehended 23 people after a crowd beat five men to death in a remote village on Sunday, the Associated Press reports. The men were suspected by local residents of being kidnappers, which police attributed to a message that circulated in the area on WhatsApp warning of active gangs of child abductors.

Maharashtra chief minister Devendra Fadnavis warned that “stern action will be taken against rumor mongers,” but the authorities’ reprimands have been powerless to stem the attacks, which have seen over 20 innocent bystanders killed by inflamed local vigilantes in recent months, according to Indian media. Here’s what to know:

A crowd descended on a group of seven or eight men Sunday in an isolated tribal village in the Dhule district of Maharashtra state, according to Indian newspaper The Hindu. The men, members of a nomadic community according to The Hindustan Times, were suspected of being child kidnappers.

After one of the men was observed speaking with a local child in a market, the group was detained and beaten by local villagers, bludgeoning five of them to death. Two police officers were also reportedly injured in the melee.

“The mob was merciless,” said police officer M. Rajkumar, according to AP.

An additional 17 people are suspected of taking part in the incident. Those already arrested have been booked for murder and rioting, and the victims were identified by the authorities, though their names have not been disclosed.

Police also imposed a curfew in the village and have deployed auxiliary forces, but the area remains on edge, the BBC reports.

Have there been similar cases?

Twenty-seven people have been killed in 13 incidents of vigilante attacks inspired by false WhatsApp messages warning of child kidnappers or organ harvesters since May, according to the Times of India. Many of the attacks have targeted strangers in remote communities, including people from another region or who speak a different language from the mob.

The attacks have also spanned the sub-continent, from the southern state of Tamil Nadu, where a 55-year-old woman was killed in early May after giving sweets to children, to northeastern Assam, where two men were killed after stopping to ask for directions in June, to western Gujarat, where a 45-year-old female beggar was killed last week.

In another incident in Maharashtra this week, police came to the aid of a family of five, including a 2-year-old child, who were beset by a mob of thousands, according to AP.

What are the authorities doing about it?

The Indian government is mulling a response to the rumors circulating on WhatsApp, which has some 200 million monthly users in India, making the country the app’s largest market, according to the Washington Post. The app, which is ramping up outreach ahead of India’s national elections next year, has introduced new features to identify forwarded posts, making it easier to flag mass-disseminated messages.

In the interim, local authorities have attempted to tackle the issue themselves. In Maharashtra, police have distributed pamphlets to debunk the messages; elsewhere, law enforcement has set up new monitoring stations in an attempt to identify and preempt inflammatory reports before they take off, according to the BBC. In June, police joined civilian protestors the southern city of Hyderabad to demonstrate against the spread of the rumors.

“When rumors start circulating on social media, it takes some time to stop them completely,” Assam police representative Mukesh Agarwal told the BBC.

The authorities face an uphill battle in rural areas, where digital literacy is low. In eastern Tripura, internet and SMS services were suspended last week after a “rumor buster” hired by the local government to educate local villagers was killed by a mob, Agence France-Presse reported. 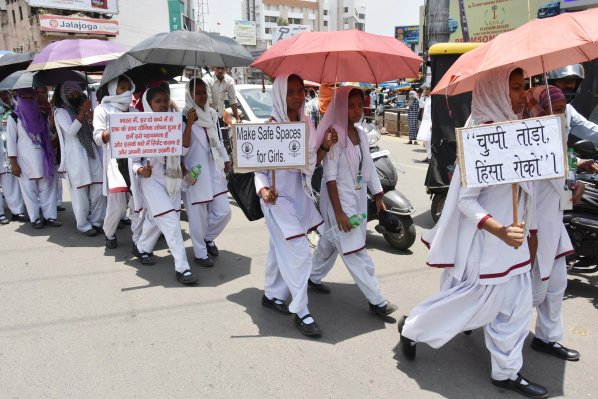 Five Charity Workers Kidnapped and Gang-Raped in East India
Next Up: Editor's Pick