An American woman killed after a boat exploded Saturday in the Bahamas has been identified by her family, while another American woman underwent a double leg amputation after suffering severe injuries in the blast.

The boat was carrying ten American tourists and two Bahamian nationals when it burst into flames Saturday morning, killing one American and injuring nine others, the Associated Press reports. Video of the incident shot from a neighboring vessel showed thick smoke and flames consume the 40-foot-boat, as onlookers jumped into shallow waters to help rescue passengers.

Authorities have not released the names of those on board, but the woman who died was identified Monday by her father as Maleka Grimes Jackson of Chattanooga, Tennessee, local ABC-affiliate NewsChannel 9 reports. Jackson was reportedly celebrating her 15th wedding anniversary in the Bahamas with her husband Tyran, who was injured in the blast. The couple reportedly have a 12-year-old son.

The U.S. Coast Guard airlifted four people injured in the explosion to St. Petersburg, Florida Saturday. Another six are being treated in Nassau, the Bahaman capital, according to AP.

Among the injured was Stefanie Schaffer, 22, a dancer whose injuries necessitated a double leg amputation below the knee, ABC News reports. Schaffer, who “danced her whole childhood,” according to her brother George Schaffer, suffered multiple broken bones, including a fractured spine, two broken arms, a broken wrist, as well as internal injuries. Their mother also reportedly sustained several broken bones and a lung contusion.

Stephanie Schaffer was in a medically induced coma in critical condition Monday, according to ABC, while her family was planning to relocate her to Florida. “We are hoping to get them back to the USA before anymore surgeries have to happen but only time will tell,” George Schaffer wrote on Facebook.

Bahamian member of parliament Chester Cooper called the incident a “sad day” for the Bahamas and “for our American friends” in a Facebook post Sunday. “We are saddened and our hearts are hurting, but we will get through this together,” Cooper added.

Bahamian authorities are still investigating the cause of the accident, according to AP. 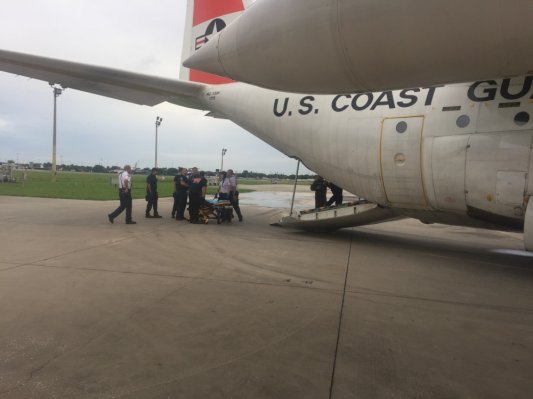