The Trump Administration Won't Say How Many Separated Children It's Still Holding. The Clock Is Ticking

It’s been nearly two weeks since President Donald Trump ordered the end to his administration’s policy of separating families at the U.S.-Mexico border – and the agency in charge of reuniting them won’t say how many of the children are still in its care.

Health and Human Services Secretary Alex Azar told lawmakers last week that 2,047 separated minors were in the care of the agency’s Office of Refugee Resettlement (ORR). But when TIME reached out to HHS to see how many separated minors are still being cared for in HHS-funded facilities on Monday, a spokesperson would only say how many minors remain in their care, generally.

“While we understand the interest in detailed breakdowns of this information, our mission has been and remains to provide every minor transferred to HHS, regardless of the circumstances, with quality and age-appropriate care and a speedy and safe release to a sponsor,” an email from an HHS spokesperson read. “Currently, there are more than 11,800 minors in our care.”

That number includes “unaccompanied minors” who crossed the border without their parents.

Efren Olivares of the Texas Civil Rights Project, says it’s evidence that the Trump Administration had not established a plan to reunite parents and kids when they started separating them at the border.

Olivares says his organization, which is working with 381 separated families, has confirmed five cases of a parent being deported back to Central America without their children.

Over the weekend, hundreds of thousands of protestors took to the streets across the country calling for the federal government for Families Belong Together rallies.

The Trump Administration is also up against a tight deadline when it comes to reuniting parents and children. Last Tuesday, a judge ordered that children under 5 years old must be reunited with their parents within 14 days. Children over age 5 have to be reunited within 30 days.

The HHS spokesperson said that the agency is not providing the number of separated children in its custody because it is evaluating the impact of that court order and because of the “constantly changing number of unaccompanied children in our care.”

Federal officials have said they are working to reunify families quickly — Azar testified that “several hundred” families had been reunited — but activists say there does not appear to be a concrete system in place to get families back together.

“It appears that at some point, the order came down to separate the children from their parents and they started taking the children with no plan in mind to reunite them,” Olivares says. “That’s why now they’re scrambling way after the fact to come up with a plan to reunite them and now they’re working against the clock with this injunction.”

In order for a sponsor – often a family member – to take custody of an unaccompanied minor under Office of Refugee Resettlement care, that person has to submit an application, pass an assessment, provide documents to prove their identity, provide proof of residence and how they will financially support the child and provide fingerprints for household members. The Office of Refugee Resettlement has agreed to share the fingerprints with the Department of Homeland Security.

The sponsors are also responsible for paying for the minor’s travel out of custody. The New York Times reports families have been asked to pay as much as $1,800.

Those hurdles could make it difficult for the federal government to release the remaining minors to sponsors or their parents before the court ordered deadline.

Secretary Azar said last week that the Administration is working to keep families in contact, but if a parent remains in custody their child cannot be released to them while they are in detention because of a longstanding court settlement.

The Trump Administration has asked a federal judge to modify that agreement, known as the Flores Settlement Agreement, in order to allow children to be detained with their parents. And last week, the Administration told a judge that it believes it already has the authority to detain families together. 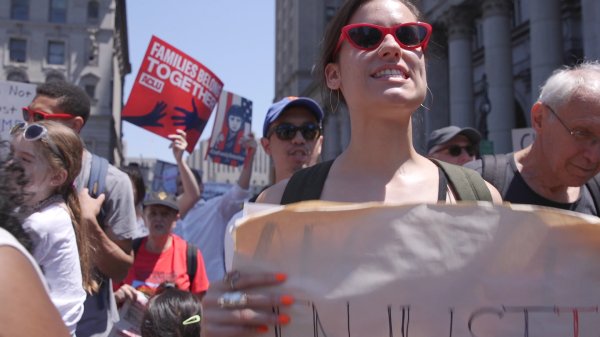 More Students Are Studying Immigration Law Because of President Trump's Policies
Next Up: Editor's Pick