'I Am Here to Salute My President': Mexicans Celebrate Lopez Obrador's Left-Wing Landslide

Packing Mexico City’s central square and surrounding streets, thousands of supporters of the leftist president-elect Andres Manuel Lopez Obrador celebrated his landslide victory into the early hours of Monday. They waved banners, blew whistles and shouted “Pres-i-dente.” Some had tears in their eyes as they chanted and danced as confetti pumped out of machines. Others called out, “Si se puede” (Yes we can), a chant also used for Mexico’s national soccer team when it wins games.

The festivities had been a long time coming, the culmination of a 30-year struggle by the Mexican left to win the presidency. That struggle began all the way back in 1988, when the leftist candidate Cuauhtemoc Cardenas first ran for the top job and continued through two more of his attempts and Lopez Obrador’s three presidential runs.

“It has been a bloodstained struggle. So much injustice, people murdered,” said Alejandro Miranda, a 48-year-old architect, who came with his wife and carried a huge Mexican flag. Miranda described how he had voted for Cardenas or Obrador for three decades, and marched over the years to protest alleged electoral frauds and massacres of students and indigenous villagers. “This is emotional,” he said, tearing up. “You have no idea.”

Marta Camacho, a 70-year-old retired primary school teacher, stood on a fountain to get a glimpse of Lopez Obrador, 64, driving through the streets after the electoral institute declared his victory. “Finally we have change after such a long wait,” said Camacho, who also said she had voted for the left since 1988. “Our presidents have been destroying this country for years, robbing all the resources. Now we have a hope of change, of a better path.”

When Obrador finally spoke, the supporters raucously cheered, and returned his cries of “Viva Mexico.” But when screens showed the outgoing President Enrique Pena Nieto of the Institutional Revolutionary Party or PRI, many of the crowd booed hard.

For most of the twentieth century, the Mexican presidency was held by the PRI, which dominated the ideological center, while incorporating everyone in its ranks from trade union bosses to business leaders. It was long challenged from the right by the National Action Party, while a far left opposition would only poll a couple of percent.

In the 1980s, however, the PRI drifted to more free market policies and a group of its members abandoned the party, including Cardenas and Lopez Obrador. When Cardenas ran for president in 1988, he was winning in the count until the computer system counting votes supposedly crashed—widely believed to be a fraud. The PRI managed to stay in the presidential palace.

“In Mexico, everybody remembers the 1988 election,” says Gustavo Flores-Macias, a specialist on the Latin American left at Cornell University. “Many people felt that was stolen from the left and that would have been a very different path for the country.”

After Cardenas failed to win the presidency on two more occasions, Lopez Obrador took over the charge. He ran for president in 2006, losing by just 0.6 percent and claimed there had been a fraud akin to 1988, leading his supporters to block the streets of the capital for months in protest. In 2012, he lost to the PRI’s Pena Nieto by a larger margin of 6 percent and unsuccessfully challenged the result in court. Finally, on Sunday, he beat second place Ricardo Anaya of the PAN by two votes to one, while the PRI candidate Jose Antonio Meade dragged behind in third place.

Lopez Obrador’s success this time came after he built a large coalition, including more former PRI politicians, and allied with smaller political parties, including one with socially conservative views. Luis Trejo, who joined the celebrations, said he had been a PRI supporter but switched allegiance because he felt the economy was too slow while there was too much violence. “We need a change,” he said.

Lopez Obrador also gained the support of many younger voters looking for something different. Jonathan Andrade, 26, who was not even born back in 1988, feels Mexico’s violence and corruption is a major barrier for young people and a new approach is needed. “He can unify the county,” Andrade said. “He has an economic and financial plan.” Lopez Obrador has promised scholarships for high school and university students, as well as paid apprenticeships to stop young people getting into crime.

Flores-Macias says this broad coalition could face difficulties when it comes to executing policies. “It is hard to keep all of these different interests happy—all these different politicians that have rallied behind his campaign,” he says. “Just very naturally that will start unraveling.” Opponents have also questioned whether Lopez Obrador will be able to foot the bill for all his promised programs.

Lopez Obrador faces these challenges when he takes over from Pena Nieto on Dec. 1. Meanwhile, the festivities of his election victory rivaled those that Mexico holds each year to celebrate its independence from Spain. “It shows that everything we have done was worthwhile, all the protests, the marches, the campaigning,” said Marta Alvarado, 48, who came down from Los Angeles, where has a cleaning business, to witness the election. “I am here to salute my president.” 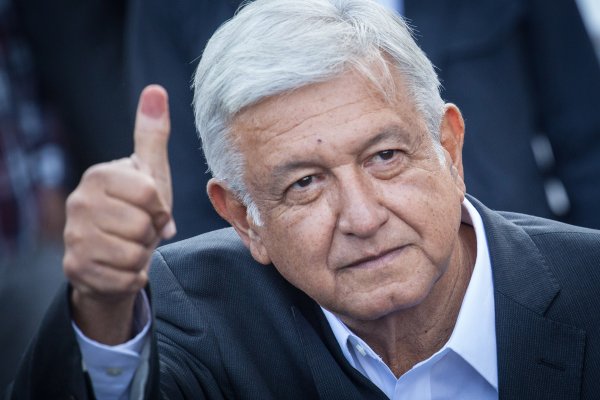