The U.S. Coast Guard deployed an HC-130 airplane from Air Station Clearwater to medevac four Americans after a boat explosion in the Bahamas
U.S. Coast Guard
By Alix Langone

An American woman was killed and nine other people were injured when a tour boat exploded in the Bahamas Saturday, according to authorities.

There were 10 Americans and two Bahamians on the boat, and two people were unharmed, the Royal Bahamas Police Force told ABC News.

The dead woman’s identity was not released.

The U.S. Coast Guard said it received a call from the Royal Bahamas Police Force “requesting assistance after boaters suffered from various injuries,” around 11 a.m. ET Saturday morning. Four Americans were medically evacuated to Florida, according to the U.S. Coast Guard. Five victims were airlifted to Princess Margaret Hospital on New Providence Island in the Bahamas.

“An HC-130 Hercules airplane crew with two medical personnel from Air Station Clearwater was launched, landed in Exuma, and transported the boaters to the air station where emergency medical services awaited,” the U.S. Coast Guard said.

The cause of the explosion is unknown and is being investigated by the Exuma branch of The Royal Royal Bahamas Police Force, the U.S. Coast Guard said. 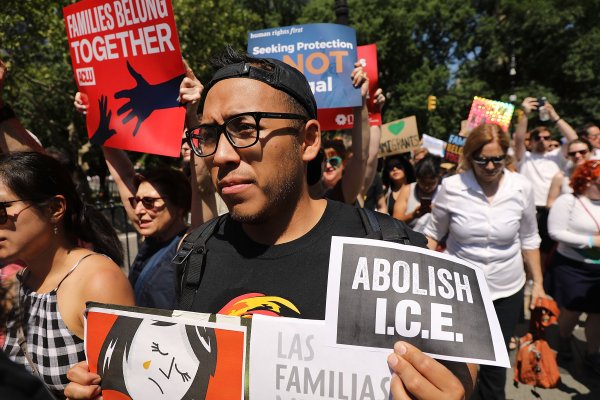 There Was a Families Belong Together Rally at the U.S. Border Patrol Station in Texas
Next Up: Editor's Pick