'I’m Never Going to Forgive It.' Meghan McCain Hits Back at President Trump's Attacks on Her Father

Megan McCain made her feelings clear about the way President Donald Trump repeatedly attacks her father, Sen. John McCain (R-AZ), over the weekend.

On Friday, McCain accepted the Lyndon B. Johnson Liberty and Justice for All award in Texas on behalf of her father, who was diagnosed with brain cancer in July 2017. She said she remains angry about the way Trump talks about her father.

Trump has a history of mocking Sen. McCain, especially for his “no” vote on whether Congress should repeal and replace the Affordable Care Act, a key tenent of Trump’s 2016 presidential campaign. He brought up McCain’s refusal to vote for his health care bill at a campaign rally for Sen. Dean Heller in Nevada last weekend, but avoided mentioning McCain by name.

“Nobody talked to him. Nobody needed to, and then he walked in, thumbs-down. It’s all right, because we’ve essentially gutted it anyway,” said Trump.

Meghan McCain said she is tired of the behavior coming from the White House when it comes to her father.

“If anyone wants to say anything to me in any way, they have to do it publicly,” she said. “I don’t take private phone calls from the Trump Administration anymore.”

McCain has a long history of criticizing Trump and the White House for attacking her father. After White House aide Kelly Sadler reportedly joked in May that the Senator’s opinion on confirming Gina Haspel, Trump’s nominee for CIA Director, didn’t matter because “he’s dying anyway,” McCain responded on The View, saying, “Kelly…it is not how you die. It is how you live.”

This weekend, McCain said that Sadler previously told her over the phone that she would issue a public apology, but she has yet to do so. Sadler left the White House shortly after making the remark. 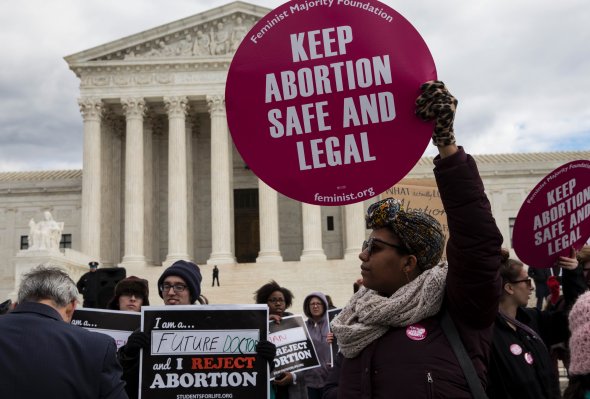 Worried About Roe v. Wade? These Activists Have Been Coping With Severe Abortion Restrictions for Years
Next Up: Editor's Pick