Review: Ant-Man and the Wasp Has Stakes as Small as Its Superheroes But It’s Hard to Dislike

Paul Rudd and Evangeline Lilly in “Ant-Man and the Wasp”.
Marvel Studios
By Stephanie Zacharek

The Ant-Man pictures—first the 2015 Ant-Man and now Ant-Man and the Wasp, both starring Paul Rudd as a low-key goofball who’s a dad first and a superhero second—are the most casual and affable of all the Marvel Cinematic Universe products. There’s no phony nihilist world destruction, no apocalyptic overkill. It’s all just Ant-Man—and, this time around, his lithe, nervy winged partner, Wasp, played by Evangeline Lilly—shrinking down, growing big and returning to normal size, over and over. Tiny, big, normal. Tiny, big, normal. As Prince once said, there’s joy in repetition.

It was great fun the first time around: Peyton Reed’s Ant-Man landed with the quiet ffffft of a dainty insect foot touching down upon the pavement. That picture was one of the surprises of summer 2015, defying expectations by refusing to give in to summer-blockbuster excess. But Ant-Man and the Wasp, also directed by Reed—who made the world’s greatest cheerleading comedy, the 2000 Bring It On—now has to live up to the same daunting, teeny-tiny stakes: It has to be more of the same, but better, and the movie doesn’t quite succeed. You can’t really make a bigger, better Ant-Man—that just means defying the diminutive, carefree scale that made the earlier movie work in the first place.

The best you can hope for with Ant-Man and the Wasp are some cute gags, and there are quite a few. And Lilly’s Wasp is a fairly captivating second banana: The script—credited to no fewer than five writers, one of them Rudd—is culturally astute enough to allow Wasp to save Ant-Man’s hapless ass more than once. You need that kind of women-taking-charge vibe in a superhero movie these days. But isn’t it a little dispiriting that we’re now just checking off boxes in the name of gender equality? Especially when you consider that Ant-Man is always wandering into mishaps and scrapes—face it, he’s not that hard to save. Why not give Wasp a truly tough Marvel assignment, like being the one to knock out that big mauve dude with the jeweled glove?

But never mind about that. If Ant-Man and the Wasp is hard to love, it’s also hard to actively dislike. The movie opens with a backstory: We see a CGI-youngified Michael Douglas and Michelle Pfeiffer as Hank Pym and Janet Van Dyne, the original Ant-Man and Wasp, in the days before they passed those mantles on to younger successors. Pfeiffer’s Janet is about to shrink down to super-tiny size and disappear into another quantum realm, on a quest to save humanity (or something). She disappears for 30 years. Cut to regular-age, gray-bearded Michael Douglas, conspiring with the duo’s daughter, Lilly’s Hope Van Dyne: They think they can save Mom Van Dyne with a special tunnel that connects this realm and that other minuscule one. The mission depends on a fancy lab they’ve built, a boxy glass building filled with all their secrets, which can be shrunk down to rolling-suitcase size. That also, unfortunately, makes it easy to steal, and a sleazy Southern businessman, Walton Goggins’ Sonny Burch, does his damnedest to make off with it. Someone else wants it too: Ghost (Hannah-John Kamen), a shimmery figure whose superpower is a kind of now-you-see-her, now-you-don’t mutability, seeks to use the lab for her own purposes. In her nonsuperhero guise, she’s Ava, a woman who’s in constant pain, and the lab may be key to easing her suffering.

For Hope/Wasp to rescue her mother, she must keep that lab out of enemy hands, and she devises a scheme for Ant-Man to help her, even though he’s under house arrest for two years after breaking a bunch of international laws in a previous Marvel adventure. The two get fairly equal screen time, and Ant-Man/Scott’s business partner and co-conspirator Luis gets in on the action too. He’s played by the always-appealing Michael Peña, who gets his best moment when he’s allowed to mount an escape in an awesome vintage racer, plucked from a Hot Wheels Rally Case and enlarged courtesy of Wasp and Ant-Man’s enbiggening superpowers.

The action scenes are ridiculous and reasonably fun: In one, an enlarged Hello Kitty Pez dispenser is turned into a weapon, hurled at a baddie in the manner of an old-fashioned Scottish caber toss. But the movie’s best moments are at the beginning, when Scott, trapped at home, gets to spend some quality time with his daughter, Cassie (Abby Ryder Fortson). He’s built a homemade, lo-fi funhouse that mimics the travails he faces in his job as a tiny but mighty superhero. Father and daughter crawl, insect-like, through cardboard warrens to locate a special treasure. There’s a secret door that can be unlocked only via an eye scan; an oversized eyeball drawn on a paper plate does the job. The sequence is sweet and fun and clever in the way it plays with the insect vs. human scale. Later, we’ll be treated to all the grand effects Marvel Studio money can buy, but they’re not that much more impressive than the DIY improvisation Scott has devised to amuse his kid. In that sense, Ant-Man and the Wasp reinforces the classic Christmas-morning phenomenon: Sometimes the big fancy toy isn’t nearly as much fun to play with as the plain box it came in. 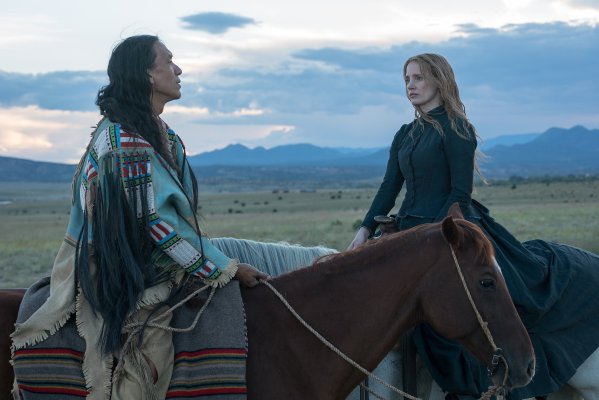 The True Story Behind 'Woman Walks Ahead'
Next Up: Editor's Pick