'We Will Prevail.' Jon Stewart Takes Over The Late Show to Speak Directly to Trump

Jon Stewart returned to his late show roots on Thursday to give his former Daily Show colleague a break from hosting The Late Show and to address the president on Stephen Colbert’s behalf.

“Every day, you got the new things that Trump does, it just wears you down,” Colbert said before Stewart swooped in from under Colbert’s desk to him a much need time out.

Stewart then proceeded to speak directly to Trump. “I know you’re upset about all the criticism you’ve taken and the ‘fake news’ and the ‘fake late-night shows,’ it’s just we’re all still having trouble adjusting to your presidency as it goes into its 500th year,” Stewart said to the president.

“Everything’s off its axis, it’s a little unusual,” he continued, citing the fact that apparently Vladimir Putin and Kim Jong-un are now “noble, intelligent role models,” while Canada, the non-violent protest by NFL players, the media, and even John McCain have been targets of the President’s criticism.

He then turned his attention to Trump’s immigration policies, which he said showed “a Dickensian level of villainy.”

“You casually separated people seeking asylum from their children, their babies,” Stewart said. “It made me realize something: You may be orange. You may like hamburgers. You may be a clown. But you are no Ronald McDonald.”

Stewart then attempted to negotiate with Trump the businessman, but couldn’t think of anything the president wanted.
“Clearly, we’re not going to be able to negotiate or shame you into decency, but there is one place where I draw the line: I won’t allow you and your sycophants to turn your cruelty into virtue,” Stewart said, showing a montage of Fox News personalities and administration officials.

Stewart realized his attempt to appeal to Trump would likely fail, but that did not stop him from trying. “What Donald Trump wants is for us to stop calling his cruelty and fear and divisiveness wrong, and join him in calling it right. This we can not do,” Stewart said. “By not wielding, we will prevail.”

He then added, “Unless, of course, the Democratic leadership continues to be a bunch of feckless…” and Colbert rushed to cut him off before he could finish the phrase that Samantha Bee made famous. 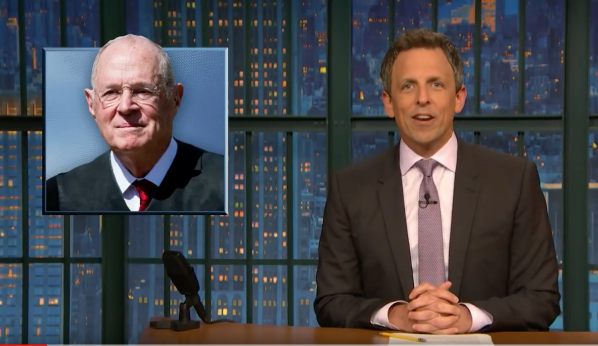 Seth Meyers Implores Justice Anthony Kennedy to Stick Around Until There's a New President
Next Up: Editor's Pick