Scorpion Finds Drake Struggling to Keep It All Together

For the better part of a decade, there’s been no artist who defined the zeitgeist quite like Drake, the Canadian rapper-singer whose work has birthed countless memes and imitators. Born Aubrey Graham, the Canadian rapper-singer has managed to sit astride the worlds of both hip-hop and pop with unusual ease—until recently. An ugly beef with the rapper Pusha-T bruised his ego and damaged his sterling public reputation. Suddenly Drake was vulnerable. Like Taylor Swift, who feinted at self-awareness on Reputation, Drake needed to use Scorpion, his first fully-fledged album since 2016’s Views, to burnish his image while appearing introspective. But also like Swift, Drake can’t wholesale ignore the slings and arrows of fame and fortune—and he has yet to answer them with art that transcends them.

Which is not to say that Scorpion doesn’t see Drake making gestures at honesty, as when he addresses the child that his most recent sparring partner Pusha revealed in a final, piercing salvo. But Drake does so in fits and starts over its formidable 25-song, nearly 90-minute runtime—and on the first track, he instead basks in the years-old glory of winning beefs with Philly firebrand Meek Mill and rap impresario Diddy.

That son was, Drake eventually explains, conceived via a fling, and has been seen by his rapper father only once. Why this awkward revelation? Per “Emotionless”: “Look at the way we live / I wasn’t hiding my kid from the world, I was hiding the world from my kid.” It’s unconvincing at best, given that Drake says this mere seconds after decrying putting on appearances, and over a Mariah Carey sample that reads as a conspicuous flex for flexing’s sake.

And as for the world’s evils beyond the ostentatiousness of Instagram: Drake is so inured or oblivious to current political realities that they get a single bar—“President doin’ us in”—in the hook of “Blue Tint.” He had time to explain further.

The ponderous choice to cleave the overstuffed Scorpion into Sides A and B results in two uneven suites of songs. (“Is There More” may explain the commercial impetus: “Soon as this album drop, I’m out of the deal,” Drake brags.) And it’s not for lack of talent, either: Dexterity with flows and uncommonly unvarnished delivery have made Drake’s bars consistently memorable. And his hitmaker’s instincts for melody have made him perhaps the hook-writer of the decade, with a superb ear for beats. Combine the three, and out comes “One Dance,” “Hotline Bling,” “The Motto,” or Scorpion’s duo of big, bright pop hits (“God’s Plan,” “Nice For What”). Combine just two, and it still might be novel genre-bending, with Scorpion getting the synth-soaked “Summer Games” and the Michael Jackson-featuring highlight “Don’t Matter to Me.”

But Drake has little to say about his position as a domineering rapper that he hasn’t already said. He has limited range as a singer and can falter on new turf—like the painful falsetto of “Ratchet Happy Birthday”, or the sex raps over a Final Fantasy sample on, uh, “Final Fantasy”—as often as he plants a flag. He need not claim to be a “bar-spitter” (“Nonstop”) when he can just be one, synthesizing flows from Atlanta’s vanguard for the electric “Mob Ties” or seeing eye-to-eye with Jay-Z—whose acidic disdain for those who would kill rising Florida rapper/reprobate XXXTentacion and let the notorious George Zimmerman breathe air in the same state may be Scorpion’s most sincere sentiment—on the sheetrock-tough “Talk Up.”

A long-frustrating inability to self-edit mars Scorpion, too. “In My Feelings,” a disastrous misunderstanding of New Orleans bounce, made this tracklist; “Nice For What” makes it superfluous and egregious. A half-dozen songs run too long; three or four could be cut entirely. Scorpion is also light on women who speak for themselves: Big Freedia, Lauryn Hill, and Nicki Minaj all appear, along with Carey, but all of them do so as samples.

But Scorpion is most important as a revelation of Drake as someone who can be stung. Its bookends—and many of the more vital intervening minutes — seem to be as much about winning that beef with Pusha-T as anything. Yet the moves feel forced: “She’s not my lover like ‘Billie Jean,’ but the kid is mine,” Drake grandiosely reveals on album closer “March 14,” which ends with a too-on-the-nose Boyz II Men interpolation. And Drake’s foil named that son—Adonis—on the bracing “The Story of Adidon,” something that Drake himself conspicuously never does on Scorpion.

A clip of a viral video from the effervescent Florida rapper Plies closes “8 Out of 10.” “You big mad,” he cackles, saying repeatedly he won’t argue with an unnamed you. He wants to be above the argument, but he’s still having it.

On Scorpion, Drake does the equivalent. And he doth protest too much. 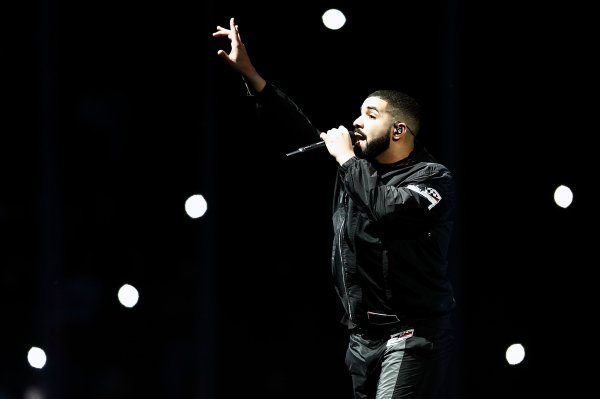