The True Story Behind Woman Walks Ahead

The movie Woman Walks Ahead — opening Friday, starring Jessica Chastain, Michael Greyeyes and Sam Rockwell — centers on what might seem like a minor moment in history: the 19th century efforts of Catherine Weldon, a white woman from Brooklyn, to paint a portrait of Lakota Sioux Chief Sitting Bull. But the story of the painting, which plays a much smaller role in the real history of Sitting Bull and Weldon than it does in the movie, is actually a window into a pivotal moment in American history.

Here’s what to know about the real people and historical events that inspired the movie.

Who Was Sitting Bull?

One of history’s most famous Native American leaders, he’s most well known today for defeating General George Custer’s army at The Battle of the Little Bighorn on June 25, 1876, near the Little Bighorn River in what was then Montana Territory. The confrontation was sparked by Custer’s troops discovering gold in the Sioux-controlled Black Hills, now in South Dakota, in 1874. The Sioux emerged victorious, and about 260 U.S. soldiers are thought to have died in what’s sometimes called Custer’s Last Stand.

Sitting Bull became famous after the battle through his role in Buffalo Bill Cody’s variety show Buffalo Bill’s Wild West. Though such shows were founded on the exploitation of stereotypical ideas, they were also a chance for Native Americans to make money and meet people who may be sympathetic to their cause, according to the National Museum of the American Indian.

Who Was Catherine Weldon?

She had several different identities. As explained by the book that inspired the movie, Eileen Pollack’s Woman Walking Ahead: In Search of Catherine Weldon and Sitting Bull, she was born Susanna Faesch in Switzerland in 1844 and immigrated to Brooklyn, N.Y. when she was a child. She made her living selling her embroidery. (She was not a widow, as the movie suggests.) She first married a Swiss doctor, Claude Schlatter, but that marriage didn’t last. They got a divorce, and she ran off with a lover and got pregnant with her son, Christopher. When she moved out West, she changed her surname to Weldon, thought to be an attempt to cover up the divorce and the fact that she had a son out of wedlock.

Though her personal life could be chaotic, she found her purpose in advocating for Native American rights as a member of the National Indian Defense Association.

Why Did She Visit Sitting Bull?

What exactly prompted Weldon to travel to see Sitting Bull is unknown, but her biography provides several clues. Native American culture was a subject of fascination in Switzerland during the time of her youth, and Pollack says that after she came to the U.S. she might have been inspired to action by the newspaper coverage of the Indians losing their land during westward expansion.

The Dawes Act of 1887 confined the Sioux to smaller reservations, and the reduced land led to food scarcity and rationing. The buffalo were gone. The policy was “the white man’s effort to remake Indians as white men in all but color,” says Robert M. Utley, author of Sitting Bull: The Life and Times of an American Patriot and former National Park Service historian. By forcing Native Americans to live on designated farm plots, Utley explains, Washington moved toward the dual dubious goals of “civilizing” Indians and also opening up what had been their land to white settlement.

Sitting Bull traveled to Washington, D.C., for negotiations about fair prices for the land in October 1888, and Weldon began corresponding with him shortly after. According to Pollack, their letters — which don’t survive today but were mentioned in other Weldon papers — contained details of these talks, fair prices for Dakota land and maps of the government’s plans to reduce the size of the tribes’ reservations.

Pollack tells TIME that Weldon, 52 years old at this point, went to Standing Rock (in June 1889 and again in May 1890) first and foremost to be Sitting Bull’s “advocate and translator.” The scene in the movie in which Weldon, who was not very wealthy, gives her money and possessions to feed the hungry people is fairly accurate. The people she helped rewarded her with a name: “Woman Walking Ahead.” But the four portraits of Sitting Bull she painted during that time were not the main reason she went out there, contrary to the impression some might get from watching the film.

“[To Sitting Bull], that differentiated her from other whites — her generosity,” Pollack says. “She didn’t save anybody but she helped.”

It’s an understandable question watching the Sitting Bull character de-robe in front of Weldon in a tent in the film.

“There was some romantic tension,” Pollack says. “There’s evidence that he proposed marriage.”

But, Pollack says, the record shows that Weldon wasn’t interested in marrying Sitting Bull (who had two wives) and maintained their relationship as his friend, lobbyist and helper.

What Was the Ghost Dance?

Though it plays a relatively minor role in the movie — Weldon and Sitting Bull emerge from the tent and see tribe members dancing in a circle around a fire pit, looking up at the sky with their arms outstretched in the air — the Ghost Dance is an important part of the Sitting Bull story. The Ghost Dance was a religious movement that emerged in some Native American communities amid the upheaval in the late 1800s. The practice involved participants donning outfits thought to give them power against bullets and dancing, as historian Mark Hirsch wrote for American Indian magazine, to “hasten the coming of the new world” — a world that was like the way things were before white settlers came. “Lakotas were ready for a message of hope,” Hirsch explained.

Woman Walks Ahead Director Susanna White consulted Native American choreographers and elders to make sure the “ghost dance” was as accurate as possible, and worked off music that had been passed down through generation.

Sitting Bull actually had mixed feelings about the ritual; Utley says that he was skeptical about its ideas but willing to go along on the idea that participants might be onto something. Weldon, on the other hand, worried about how the U.S. government would perceive the movement. And she was right; the white officials watching the Native Americans dancing were scared by it and responded with extreme force.

“His resistance to being removed from the reservation for his part in the Ghost Dance led to the attempt to arrest him,” says Utley, “which in turn led to his death.”

Is This the Same Standing Rock?

Yes. The place where Weldon visits Sitting Bull is the same place that made news recently as the Standing Rock Sioux tribe and their allies gathered there to oppose the construction of the Dakota access pipeline for fears that it would contaminate their water supply.

“The Dawes Act ultimately deprived the Sioux of much of their treaty-guaranteed land and confined them to small separate reservations,” Utley writes. “[Sitting Bull] would have applauded their opposition to the Dakota Pipeline. The white man worked at their destruction because of hunger for Indian land and an idealistic concept that Indians should be transformed into imitation white men. The contest lasted for half a century and continues in muted form to this day.”

Correction: July 3
The original version of this article misstated details about Catherine Weldon’s early life. She was born in 1844, not 1838. She immigrated to the U.S. when she was a child, not when she was 33. She did not marry and have a son with Richard Weldon. The name Weldon was part of an identity she made up when she moved out West, and she had a son with an unknown man she did not marry. 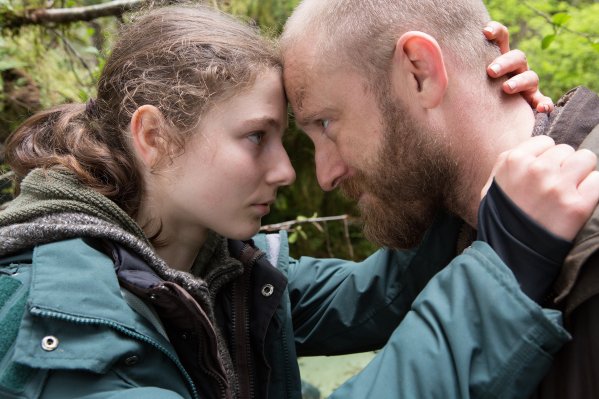 Review: Leave No Trace Is a Beautiful Movie About Living on the Fringes
Next Up: Editor's Pick