There are no shortage of scenes from The Office that are laugh-out-loud hilarious to fans. But according to Ed Helms—who played the one and only Andy Bernard—that wasn’t any less true for the cast.

During a recent appearance on the Dan Patrick Show to promote his new movie Tag, Helms reminisced about how difficult it was to stay in character while acting opposite Steve Carell as Michael Scott.

“[Steve Carell] just slays me,” he said. “There’s something in his eyes. There’s a lot of times when I was doing a scene with Steven and I had to look at his chin, otherwise, I would just lose it.”

Helms went on to reveal that Carell was so funny in a particular sequence from the season six Christmas episode “Secret Santa” that he simply could not keep it together.

“There’s an episode where he’s playing Santa,” Helms explained. “Kevin is sitting in his lap, and he’s so awful about it, because it’s uncomfortable for him, and he’s just being really rude and weird and mean about it. I had to duck behind a plant—you can see in the actual episode. And by the way, that was like take 30, because I had been laughing in every single take. He’s a genius.” 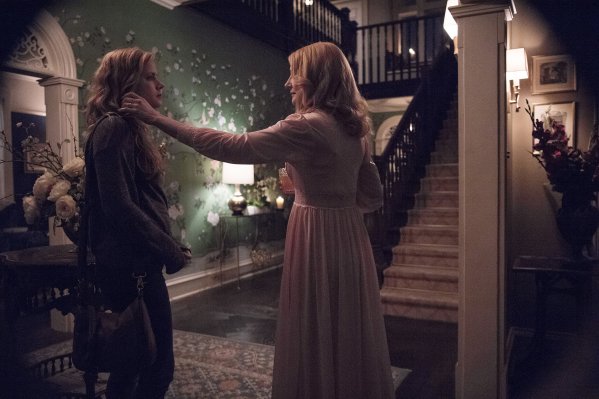 It’s Hard to Watch Sharp Objects, and Even Harder to Look Away
Next Up: Editor's Pick