Melania Trump Is Redefining One of the World’s Weirdest Jobs

It was all Melania’s idea. The statement rebuking her husband’s immigration policy. The hastily arranged trip to the southern border. Even the jacket–oh, God, the jacket. From the beginning of her husband’s term, First Lady Melania Trump has been mysterious, private to the point of secretive, seldom seen and even less often heard. As outrage over the Administration’s policy of separating children from their parents peaked, the First Lady–herself an immigrant who came to America seeking a better life–took it upon herself to speak up. But the message was so inscrutable that the mystery only deepened.

On Father’s Day, the First Lady released an unprecedented statement not so subtly taking issue with the policy. Without consulting her husband, she planned a June 21 trip to an unaccompanied-children’s center in McAllen, Texas, according to her office. Whatever message was intended, it was overtaken by the words on the back of the green jacket she wore as she boarded the plane: i really don’t care. do u?

Every First Lady bears the burden of having one of the world’s weirdest jobs. It comes with no salary or fixed portfolio but plenty of star power, expectations and scrutiny. Most of the office’s recent occupants have combined spouse-supporting symbolism with a set of pet policies. Melania Trump, by contrast, has offered only the merest glimpses of her life and the vaguest semblance of a platform. Which is why the jacket became a fresh token for speculation on the meaning of Melania. As with other women who put up with problematic men–from Hillary Clinton to Harvey Weinstein’s assistants–we can’t decide whether she’s victim or accomplice. And her silence only deepens the mystery.

The enigma begins with the Trumps’ unusual relationship. The President’s third wife, 23 years his junior, cried on election night, according to Michael Wolff’s Fire and Fury. She didn’t move to Washington for nearly six months after the Inauguration so that their only child, 12-year-old Barron, could finish the school year in New York City. She and her husband sleep in separate rooms, according to the New York Times. Barron now attends a private school in the D.C. suburbs. Melania’s parents, Slovenian citizens who are legal permanent residents of the U.S., are rumored to reside in the area.

In early May, 16 months after her husband took office, Melania unveiled her official program, a three-pronged mission to encourage healthy living, fight opioid abuse and counter cyberbullying. Then, on May 15, the White House announced that Melania was at a Washington-area hospital for a procedure to treat a “benign kidney condition.” The procedure, a surgical treatment known as embolization, is a minor one, but she didn’t resurface until 24 days later. Her husband tweeted a combative explanation for her postsurgery absence that amplified the rumors: “During her recovery from surgery they reported everything from near death, to face-lift, to left the W.H. (and me) for N.Y. or Virginia, to abuse,” he wrote. “All Fake, she is doing really well!”

At the border shelter in McAllen, Melania asked children a series of factual questions: “Where are you from?” and “How old are you?” She didn’t hug them or ask about their feelings. Then she got back on the plane, where the cable-news firestorm over the $39 jacket had already erupted. When she got off, she was wearing the jacket again. Worn by a civilian on the street, it would be a tart declaration of aloof detachment, a little bitchy, a little confrontational. But in the context of the trip, it was sharply at odds with her mission. The First Lady and her staff declined to offer an explanation. “It’s a jacket. There was no hidden message,” Grisham said. The President then undermined that statement with a tweet claiming the jacket was a message to the “Fake News Media.”

Donald Trump’s Secret Service name is Mogul; Melania’s is Muse. As a model and celebrity wife, she’s surely accustomed to being looked at. Women, especially beautiful ones, have long understood that there’s nothing so tantalizing as something you can’t understand. Now Melania’s actions raise the most tantalizing question of all. If she really doesn’t care, what might she do next? 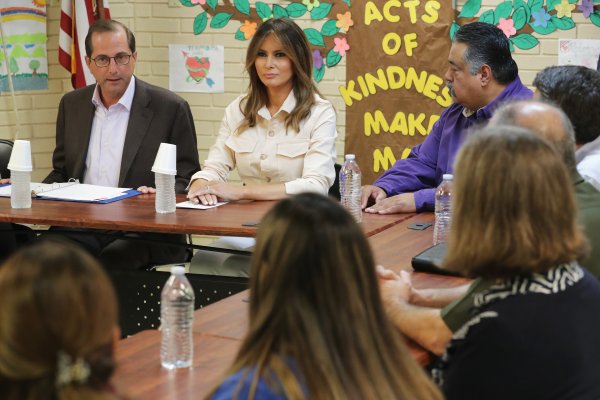