US soldiers stand ahead of a grand opening ceremony of the new headquarters building for the United Nations Command and US Forces Korea at Camp Humphreys in Pyeongtaek on June 29, 2018.
JUNG YEON-JE—AFP/Getty Images
By Joseph Hincks / Pyeongtaek

The massive $10.8 billion garrison in Pyeongtaek—America’s largest overseas military base—is in the final stage of a more than decade-long expansion project. About 45 miles south of the joint command’s former headquarters in metropolitan Seoul, it is expected to house nearly 45,000 troops, contractors, and family members by 2022, following the largest peacetime relocation program in the Department of Defense’s history. The camp also marks the virtual end of the U.S. military’s 70-year presence in the South Korean capital—something that Washington and Seoul have been discussing since 1987. It is a “significant investment in the long-term presence of U.S. Forces in Korea,” Gen. Brooks told a mostly military audience at the headquarters opening, and “living proof of the American commitment to the alliance.”

That alliance—formalized by the Mutual Defense Treaty of 1953—has successfully preserved what is now one of the world’s wealthiest democracies from the threats made by three generations of the Kim family, who maintain a tight grip north on their bizarre, autocratic state north of the 38th Parallel. But today, despite the show of strength that Camp Humphreys represents, there is uncertainty over the role the U.S. military will play in South Korea’s future.

Gen. Brooks’ emphasis on America’s partnership with South Korea contrasts with the erratic utterances of President Donald Trump, who has complimented autocrats, lashed out at international allies, and questioned the value of America’s longstanding military alliances. On the campaign trail, Trump falsely claimed South Korea pays “peanuts” for the U.S. troop presence and in February was reportedly talked out of ordering their withdrawal from the Korean Peninsula. Trump has also taken South Korea’ President Moon Jae-in by surprise, by unilaterally freezing joint military exercises with Seoul, and even echoing Pyongyang’s characterization of them as “provocative.” Last year, he also angered South Korea by misleadingly claiming that the peninsula “actually used to be a part of China.”

Read more: President Trump Is Ending ‘War Games’ in Korea. Here’s What Russia and South Korea Think About That

“People have to question the resolve and the credibility of U.S. commitments with Trump,” says Daniel Pinkston, an East Asia expert at Troy University in South Korea. “The signaling and messaging and incoherence in the policy raises questions.”

While the détente between Seoul and Pyongyang that began at February’s Winter Olympics has continued in earnest, the June 12 summit pledge to “work toward complete denuclearization,” made by Trump and North Korean leader Kim Jung Un, looks increasingly shaky. Satellite images have revealed ongoing upgrades at North Korea’s Yongbyon nuclear test site and earlier this month U.S. intelligence officials told NBC News that Pyongyang had increased production of enriched uranium at secret sites, citing “unequivocal evidence they are trying to deceive the U.S.” Following Secretary of State Mike Pompeo’s visit on July 6 and 7, North Korea accused the U.S. of making “gangster-like” demands on denuclearization and called Washington’s attitude “extremely troubling.”

President Moon has said that American forces should stay in South Korea even if Seoul and Pyongyang sign a peace treaty (the two sides are technically still at war, having concluded an armistice at the end of the Korean conflict but not a formal peace). But in May one of his top advisers said that he would eventually like to see the alliance with the U.S. end. Meanwhile, analysts say North Korean leader Kim Jong Un is attempting to drive a wedge between the two longtime allies.

‘A good deal for both sides’

At a 310,000 square foot shopping complex, opened last winter in the heart of Camp Humphreys, soldiers in fatigues eat Popeye’s chicken and drink from Arby’s cups in a food hall where a wall mural reads: “Our customers are heroes.”

Home to the 8th Army Division since last summer and currently to about 27,000 troops, contractors and dependents, the new garrison is about twice as far from the inter-Korean border as the old headquarters at Yongsan Garrison in Seoul. This means it is out of range of most of the conventional artillery installations Pyongyang has previously threatened to use to turn South Korea’s capital into “a sea of fire”—though, the increased distance hasn’t halted threats: “The larger the US military base is, the more effectively our military can hit its targets,” North Korea claimed last year.

Camp Humphreys houses an array of guard towers, tank training areas, and firing ranges, plus a flight line where Apache and Chinook helicopters are parked. But military hardware aside, the base could be a suburban slice of Anytown U.S.A., laid over Pyeoungtaek’s rice paddies. The more than 650 buildings being built or renovated across a land area about the size of central Washington DC include four schools and five churches, a hospital, the largest gym of any overseas base, a bowling alley, and an 18-hole golf course.

US soldiers watch a game during the Armed Forces Classic of the US college basketball at Camp Humphreys in Pyeongtaek, November 9, 2013.
Jung Yeon-Je—AFP/Getty Images

Facilities like these are part of the reason many South Korean men are “eager to be a KATUSA” says Park Young Min, 27, using an acronym for Korean Augmentation to the United States Army. All able-bodied South Korean males are mandated to complete about two years of military service and Park, who finished his at a U.S. base near the Demilitarized Zone (DMZ) in 2012, says that the minority picked to be KATUSA enjoy special benefits. “It’s a really good chance to learn English,” he says, “and all the things—food, facilities—are better than in the Korean army.”

South Korea is among the world’s most pro-American countries, with 75% of people holding a favorable view of the United States in 2017, according to Pew (although only 17% hold a favorable view of Trump). But not everyone sees the military presence as benign. Park Jung Eun, secretary general of an NGO, the People’s Solidarity for Participatory Democracy, says that there are “so many problems with the cost and size” of Camp Humphrey’s, arguing that South Korea’s 92% share of the base’s $10.8 billion price tag imposes too great a burden. This year, according to Reuters, South Korea also paid about $857 million for the upkeep of U.S. troops under a 5-year bilateral cost sharing arrangement signed with the U.S. in 2014. Washington and Seoul are currently negotiating over how costs will be split from 2019.

Troy University’s Pinkston says that the current cost division is actually “a good deal for both sides,” adding that detractors “underestimate or don’t integrate the economics” of regional and global security into the sums. But concerns about the base extend beyond finances. In 2006, the South Korean government sent helicopters, and over 10,000 police officers and unarmed soldiers to drive around 1000 villagers and activists from a hamlet now occupied by Camp Humphreys, which has tripled in size since Washington and Seoul agreed on plans to relocate forces from Seoul in 2004.

An activist who asks to be identified only as Joyakgol says that in May 2006 he was among some 600 people injured in Daechu—one of several villages razed for the base—when “about 20,000 [South Korean] soldiers and riot police invaded the rice fields, and the elementary school we used as our headquarters for the resistance.” According to Joyakgol, security forces cordoned off the village with barbed war until its residents were eventually evicted in 2007.

Although South Korea’s Defense Ministry has compensated farmers for their land, grievances remain. Kang Mi, President of the Pyeongtaek Peace Center, and one of about 20 people protesting outside the garrison on June 29 tells TIME through an interpreter, “given the U.S. Military has built their base on land stolen from citizens and farmers, holding such a glamorous opening event is inappropriate.”

Allegations the South Korean government has catered to the American alliance at the expense of its citizens date back decades. In a landmark ruling last year, a South Korean court partially affirmed a case bought by scores of former South Korean sex workers against their own government. The court found the government had no legal basis for forcibly detaining the women, who had catered to U.S. troops in the 1960s and 1970s, in so-called “camptowns” around bases to prevent the spread of venereal disease. More contemporary issues—including noise, pollution, crime, and sexual violence around U.S. military facilities—have long strained relations between the U.S. garrison and the locals. Public protests erupted in 2002 when a U.S. court-martial acquitted two GI’s of negligent homicide after their vehicle crushed two teen-aged girls during an army training exercise. In 2011, South Korea handed a 10-year jail sentence to a U.S. soldier who raped an 18-year-old-girl near a base in Dongducheon city. And in 2014 then USFK Commander Gen. Curtis Scaparrotti banned U.S. troops from attending so-called “juicy bars”, which sell overpriced juice in exchange for the companionship of women “subjected to debt bondage and made to sell themselves as companions, or forced into prostitution.”

Joyce Kim, a counselor at Durebang, a local NGO that assists marginalized women living close to military bases, says large numbers of migrant workers from Russia and the Philippines began moving to communities around bases in 1994, as numbers of South Korean sex workers declined. A slump followed Scaparrotti’s 2014 directive, and tighter visa controls have helped limit trafficking, but attendance at clubs that allegedly exploit migrant workers is still a problem. “As long there is a demand, the camptowns will always provide that kind of service,” Kim says.

The Department of Defense—which operates a zero-tolerance policy on prostitution—is encouraging military families to relocate to Camp Humphrey in the hope of quashing some of the social issues that have plagued bases in the past, the Diplomat reports. Today, the USFK’s website includes a hotline for people to report sexual assault. It has also developed an app to help troops check whether an establishment has been blacklisted for selling sex or serving underage patrons.

Lt Col Jennifer Lovett tells TIME by email that throughout the relocation process officers form Camp Humphreys frequently met with the officials in Pyeongtaek City, and currently meets with them two or three times a week, to discuss issues between the military and civilian communities. The garrison also holds monthly meetings with community leaders and local merchants associations in Pyeongtaek, she says.

At the camp’s opening, the focus remained on the endurance of the U.S.–Korea partnership. That evening, the 8th Army band performed at a carnival in front of Pyeongtaek City Hall—an event Lovett said was a good chance for Pyeongtaek citizens to recognize USFK as a “good neighbor.” Before the flags of South Korea, the United States, and the United Nations, Brooks meanwhile told his audience that in exchange Seoul’s investment of more than 90% of the cost of the base, “the United States remains with you 100 percent.” Then he uttered the Korean language motto of the alliance, Katchi kapshida, meaning “we go together.” 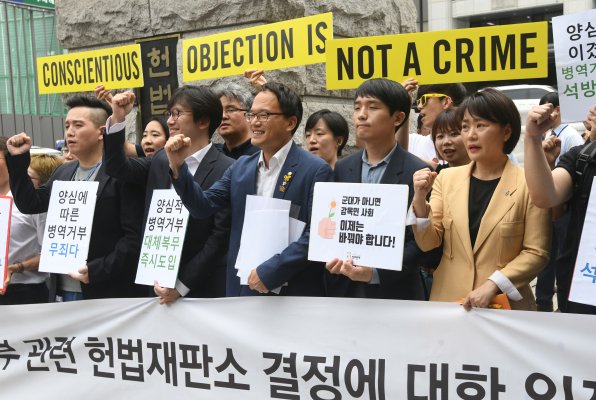 South Korea to Allow Alternatives for Mandatory Military Service
Next Up: Editor's Pick