This Painting Is Probably How You Imagine the Original Fourth of July. Here's What's Wrong With It

The only problem is that that’s not actually what the painting shows.

One major issue is the matter of when the Declaration of Independence was actually signed. Two days earlier — on July 2, 1776 — Congress had approved Richard Henry Lee’s resolution stating why the Founding Fathers were declaring independence from Britain. On July 4, 1776, the document we know as the Declaration of Independence was sent to the printer, which is why that date appears on it. So, what actually happened on July 4, 1776, in Philadelphia was a much more low-key gathering, and most of the signatories didn’t put their names on the document until Aug. 2, with some signing it as late as 1777.

The date Trumbull’s painting does depict is June 28, when a draft of the Declaration of Independence was ready for review. While the committee that presented the draft of the Declaration had only five members — John Adams, Roger Sherman, Robert Livingston, Thomas Jefferson and Benjamin Franklin. There are 47 portraits in the version that hangs in the Capitol Rotunda (though 56 men actually signed the Declaration), and the committee is shown presenting the declaration to John Hancock, who was the president of the Continental Congress.

However, “no such ceremonial moment with all present took place,” as historian David McCullough wrote in 2007.

Here’s how McCullough described the other inaccuracies in the setting:

That said, the people who are depicted look pretty much the way they should, according to McCullough. And that’s no coincidence: Trumbull had painted many of the delegates from life; Jefferson sat for him in Paris, John Adams and Benjamin Franklin were painted in London, and others were captured on a travel-sized canvas that Trumbull toted up and down the Eastern seaboard from Boston to South Carolina via carriage. When he couldn’t paint someone in real life, he drew upon other portraits. “[Trumbull] excluded those for whom no authoritative image could be found or created, and he included delegates who were not in attendance at the time of the event,” according to the Architect of the Capitol. (A full list of who’s in the painting can be found on the department’s website.)

The idea for the commemorative painting was the brainchild of Thomas Jefferson, who was hosting Trumbull exactly a decade after the signing in Paris, where the Virginian was serving as a representative of the United States. He gave Trumbull, who was living in London at the time, the lowdown of what happened on June 28 and who should be included. Jefferson also may be partly responsible for some of the inaccuracies in the layout of the room, the Architect of the Capitol says, as they could be from a misinterpretation of a sketch of the room that Jefferson drew for Trumbull.

The more people who have looked at the painting since it was hung in the Capitol Rotunda about 200 years ago, the more rumors have spread.

For example, is Jefferson stepping on Adams’ foot, a symbol of their rivalry? Quite to the contrary: Smoke, dirt and humidity has changed the appearance of the pigment and thus the shape and appearance of Jefferson’s foot, a spokesperson for the Architect of the Capitol has maintained.

But there is one thing few would dispute the painting captures quite well, even if it doesn’t depict the series of events exactly as they took place: the momentousness of the occasion. 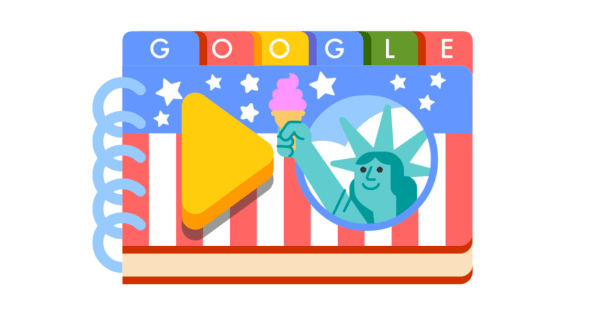 The Fourth of July Google Doodle Celebrates Each State's Most Popular Holiday Recipes
Next Up: Editor's Pick