Thousands Are Expected to Attend the Families Belong Together Marches Across the U.S. Here's What to Know

The Families Belong Together March was planned before President Donald Trump ended his administration’s policy of separating migrant children from their parents at the U.S.-Mexico border. But organizers say the protests, which are scheduled to take place in cities all over the country on Saturday, June 30, are still just as important.

A judge ordered authorities to reunite separated families within 30 days and the Administration’s “zero-tolerance” immigration police remains in place. Jessica Morales, the political director at the National Domestic Workers Alliance, says the country can’t rely on the Trump Administration to keep its word to reunite families and end separation for good.

“Our focus is to put and end to the ‘zero-tolerance’ immigration policies and reuniting every single one of these parents and children,” she tells TIME.

She says Trump’s reversal of the family separation policy is proof that activism, like the Families Belong Together March this weekend, is working.

Organizers also said the family separation is just one part of a bigger problem with Trump’s immigration policies. They argued the Trump Administration have been “systematically criminalizing immigration and immigrants, from revoking Deferred Action for Childhood Arrivals (DACA) to ramping up intimidating ICE tactics.”

Here’s what we know about the Families Belong Together March, including when it starts, what cities are hosting marches and who is expected to attend.

When is the Families Belong Together March?

The Families Belong Together March will take place on Saturday, June 30 — with marches planned for most major cities in the U.S.

Organizers said they expect tens of thousands of people — dressed in white, representing peace and unity — to attend the Families Belong Together March.

The march was organized to send Trump and Republicans in Congress a clear message about family separation, according to the organizers.

Where are Families Belong Together marches happening?

The main Families Belong Together March is scheduled for 11 a.m. at Lafayette Square in Washington, D.C. on Saturday, June 30.

However, Anna Galland, executive director of nonprofit Move On, one of the march’s organizers, said there are local protests scheduled in all 50 states. Major protests are planned in Minneapolis, Nashville, Austin, Chicago, Los Angeles and New York City.

A total of 628 rallies have been registered, including some outside the U.S. in cities like Berlin and London.

Anyone interested in participating can visit the Families Belong Together site and search for rallies by zip code.

Who is behind the Families Belong Together March?

Dozens of organizations have come together to plan the marches on Saturday, including the National Domestic Workers Alliance, Leadership Conference on Civil and Human Rights, ACLU, MoveOn.

According to the Familes Belong Together March website, the protest is meant to send a message to the Trump Administration, which they fear will overturn the recent decision to reunite children with parents.

“We have momentum and we cannot slow down now since the the court ruling along isn’t enough and could be overturned. Our mobilization, in over 600 locations around the country and still growing, is critical to showing the widespread public demand for just immigration policies—because families belong together … and free!” according to a message on the march’s website.

Galland tweeted that Saturday’s marchers will also protest other big stories in the news including the Muslim ban, the Janus decision and the retirement of Supreme Court Justice Kennedy, which could lead to an even more conservative Supreme Court.

Who is attending the Families Belong Together March?

Organizers do not know the exact numbers, but said they expect thousands to attend the over 600 marches.

What other immigration protests have happened?

On Thursday, the organizers of the Women’s March and activists with the Center for Popular Democracy carried out a protest in Washington, D.C. that had called for “mass civil disobedience.” Nearly 600 people were arrested.

Women gathered in the Hart Office Building and chanted “Abolish ICE,” draped in foil blankets similar to those given to migrants housed at U.S. detention facilities. The sit-in lasted more than two hours before Capitol Police charged the protestors with unlawfully demonstrating. Among those arrested was Rep. Pramila Jayapal, a Washington Democrat. Jayapal tweeted a video of herself in which she said she was proud to be arrested to protest Trump’s immigrations policy.

“We’re here to fight for our families to be free, to fight for the ability of our kids to be with their parents — not in cages, not in prison, but able to live their lives free, safe and secure,” Jayapal said. 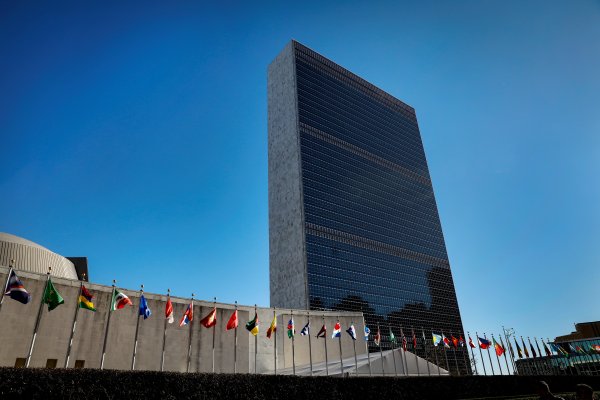 The United Nations Rejected President Trump's Pick for a Migration Group
Next Up: Editor's Pick