Dozens gathered outside the Supreme Court on Tuesday to protest its decision upholding President Donald Trump’s so-called travel ban. But inside the Capitol Building across the street, Trump’s Republican colleagues felt vindicated.

“The Supreme Court directly upheld the President’s exercise of his constitutional authority,” Sen. Ted Cruz of Texas told reporters. “Federal law is clear and explicit: the President has the authority to act in the interest of national security.”

The ban, which Trump signed within days of his inauguration in January 2017, precludes citizens of seven countries, most of which are majority Muslim, from entering the U.S.: Iran, Somalia, Libya, Syria, Yemen, North Korea, and Venezuela. It faced immediate public outcry and, soon thereafter, a number of challenges in U.S. courts. The protracted judicial conflict was settled in Tuesday’s decision, in which five of the nine justices ruled that issuing the ban was within Trump’s constitutional authority as President, and that the ban was not dictated by religious bias against Muslims.

Still, Chief Justice John Roberts wrote in his opinion: “We express no view on the soundness of the policy.”

In the Capitol, Republican lawmakers framed the decision as a victory for proactive national security measures. “It doesn’t surprise me that the Supreme Court upheld it,” Sen. Thom Tillis of North Carolina said. “I think that the countries of origin that he was concerned with — we needed to do a better job of vetting them. There are a number of people I’m sure are worthy of vetting, but we’re letting in bad actors.”

But more than anything else, the Supreme Court’s decision was a significant and tangible byproduct of a larger Republican battle being waged in Washington since Trump took office: the concerted effort to stack U.S. courts with conservative judges. The Trump administration and the Republican-controlled Congress worked to successfully confirm 12 appellate court judges in Trump’s first year in office — four times the number confirmed during President Barack Obama’s first year.

The pièce de résistance of this effort was the confirmation of conservative justice Neil Gorsuch to the Supreme Court last April. Justice Antonin Scalia — arguably the most influential conservative mind in U.S. jurisprudence in modern history — had died just over a year prior. To replace him, then-President Obama had nominated the moderate Merrick Garland. Senate Majority Leader Mitch McConnell refused to grant Garland a hearing. McConnell has defended this decision, claiming a precedent that Presidents should not nominate Supreme Court justices during their final year in office. (McConnell and other Republicans call this precedent the “Biden rule,” referring to a speech that then-Sen. Joseph Biden of Delaware gave in 1992 calling on the White House to wait until after that November’s presidential election to put forward a nomination.)

McConnell did not try to conceal his happiness with the Supreme Court on Tuesday. Shortly after the decision was announced, the Twitter account for McConnell’s Senate reelection campaign tweeted a photo of McConnell and Gorsuch shaking hands, without additional comment.

“I’m happy to see the Supreme Court right-of-center as it was before Justice Scalia passed away,” McConnell told reporters later in the day. He defended the court’s decision on the travel ban, saying it was motivated by responsible jurisprudence rather than politics. “I think they’re following the law. Justice Scalia used to say, ‘you’re not a very good judge if you’re not occasionally unhappy with the outcome you’ve reached.’ Those are the sorts of people that the President has been sending up and we’ve been confirming.”

When pressed by a reporter to reconcile his comments with remarks he made a year and a half ago in which he expressed hesitation about the travel ban, McConnell referred to the policy’s evolution over time. “As you know, there were several earlier iterations of the so-called travel ban,” McConnell said. “I think the administration finally got it right, and the Supreme Court agreed with that.”

The Supreme Court’s decision also offered one more flashpoint at a moment when the controversy over Trump’s immigration policies has monopolized popular attention. A long-awaited vote on two immigration reform packages in the House of Representatives has stalled to the point of farce as Republicans spar internally. It’s unclear what sort of bill can or will pass both the House and the Senate. That reality has not been lost on those who are protesting the state of affairs.

“From the very beginning, Congress could have taken measures to repeal this, and they haven’t,” Mahsa Payesteh, outreach director at the National Iranian American Council, said while outside of the Supreme Court on Tuesday, where she was protesting the travel ban decision. She gestured to the Capitol behind her. “So that’s where I’ll be. I’ll be moving this protest in front of that building next.” 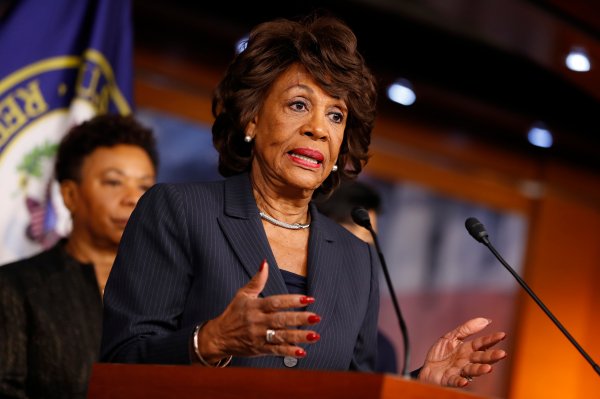 Maxine Waters Says She Did Not Call for Harm of Trump Officials
Next Up: Editor's Pick